Arsenal welcome Ostensunds to the Emirates on Thursday night. Here is the side Gooner Mac thinks Arsene Wenger will select for the game:

Arsenal will be looking to book their place in the last-16 of the Europa League when they welcome Ostensunds to the Emirates on Thursday night.

Goalkeeper: The boss has confirmed David Ospina will once again start in goal after playing in every round of the Europa League so far this season so Petr Cech won’t be involved.

Defence: Wenger is expected to protect his key men ahead of Sunday’s Carabao Cup final so Laurent Koscielny, Nacho Monreal and Hector Bellerin should all be rested.

Sead Kolasinac could get a recall at left-back while Per Mertesacker may also get a rare run-out in defence alongside Rob Holding if Calum Chambers is deployed at right-back.

Midfield: Aaron Ramsey returned to training today after recovering from a groin injury that’s kept him out in recent games but the Welshman won’t be risked against Ostensunds with Man City on the horizon.

Jack Wilshere and Granit Xhaka are also expected to be rested so Ainsley Maitland-Niles could get another chance to impress alongside Mohamed Elneny tomorrow night.

Attack: Alexandre Lacazette is on-course to return from his knee injury inside a month but the Frenchman remains on the sidelines tomorrow while Pierre-Emerick Aubameyang is ineligible.

Therefore, Danny Welbeck should get another run-out up front and he’ll be looking to put-in an improved performance after a disappointing outing in the first leg last week.

Henrikh Mkhitaryan will start against Ostensunds as he’s cup tied for Sunday’s final while Alex Iwobi could also keep his place after starting in Sweden last week.

Mesut Ozil was back in training today after being struck down with another sickness bug earlier this week but he won’t feature tomorrow so Reiss Nelson could get a chance in attack. 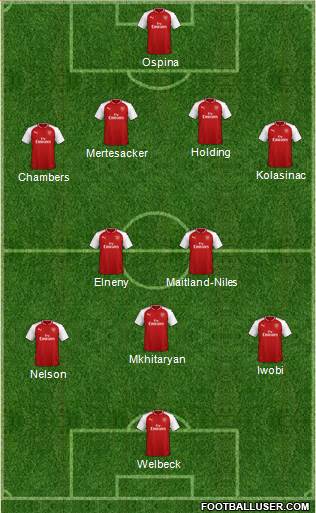