The January transfer window in closed so it’s time to look at those deals that didn’t get over the line and those being lined-up for the summer. Today, Man Utd are linked with Alvaro Odriozola…. 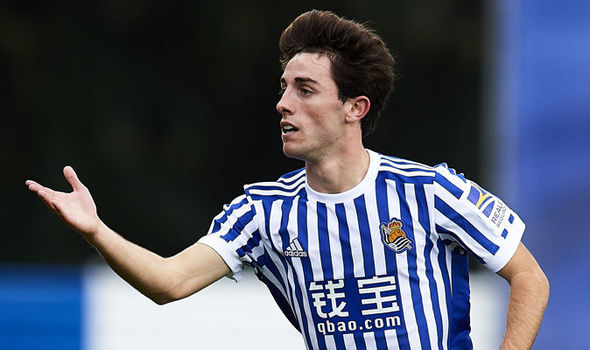 Manchester United have stepped-up their pursuit of £18m-rated Real Sociedad right-back Alvaro Odriozola but could face competition from the likes of Real Madrid, according to the Daily Mail.

Odriozola has been with Sociedad his entire career having joined the club as a youngster and progressed through the youth ranks before breaking in to the first team set-up last year.

The 22-year-old is now a regular in the starting eleven having made 31 appearances in all competitions so far this campaign while he also made his debut for the senior Spanish squad during the World Cup qualifier against Albania in October.

Odriozola’s impressive form has alerted several top clubs throughout Europe as the Daily Mail claim that Manchester United, Real Madrid and Barcelona have all been showing a keen interest this season.

It looks like United have stepped-up their pursuit as the newspaper says Jose Mourinho’s scouts watched the right-back play during Sociedad’s Europa League tie at RB Salzburg last week.

Odriozola scored in the first leg and while he produced a solid display in front of the United scouts last Thursday he couldn’t prevent Sociedad from crashing out of the competition 4-3 on aggregate.

No doubt United will continue to monitor his progress during the closing stages of the season but the newspaper says Sociedad value Odriozola at around £18m – which shouldn’t be a problem for a club like United.

Mourinho is expected to strengthen his options at right-back this summer as Antonio Valencia turns 33 in August and Matteo Darmian is set for a move after being frozen out of the first team this season.

Odriozola is probably not ready to command a first team place at Old Trafford just yet but if he joined United this summer he would be able to learn from Valencia next season before looking to take over the first team shirt in 2019.

We’ll have to wait and see how things develop over the coming months but a right-back is just one of several positions Mourinho wants to strengthen as the Daily Mail claim United also want a new left-back and two midfielders so it looks like it’s going to be another busy summer at Old Trafford.