The January transfer window in closed so it’s time to look at those deals that didn’t get over the line and those being lined-up for the summer. Today, Man Utd and Chelsea are linked with Elseid Hysaj…. 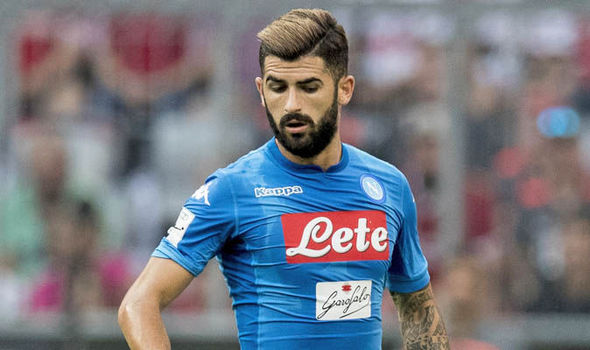 Manchester United and Chelsea are among the clubs to have made enquiries over signing Napoli full-back Elseid Hysaj at the end of the season, according to a report by ESPN.

Hysaj came through the youth ranks at Empoli before earning a move to Napoli in 2015 and he’s developed in to one of the best right-backs in Italian football over the past two years.

The 24-year-old has been virtually ever-present this season with his impressive form helping Napoli go toe-to-toe with Juventus for the Serie A title this campaign.

It seems Hysaj’s potential has also alerted clubs here in the Premier League as ESPN claim that Man Utd and Chelsea have made initial enquiries over a potential deal to sign the defender this summer.

Jose Mourinho needs to find a new right-back as Matteo Darmian has been frozen out while Antonio Valencia turns 33 this year so the United boss could view Hysaj as the ideal long-term replacement.

Chelsea are also expected to further strengthen their squad this summer after putting-up a disappointing defence of their title and Hysaj would provide support for Victor Moses in the right wing-back position if he moved to Stamford Bridge.

However, the English duo will face stiff competition as ESPN claim that Real Madrid are also in the running to sign the Albanian international as Zinedine Zidane looks to revamp his squad following a hugely disappointing season.

We’ll have to wait and see how this all progresses over the coming months but Hysaj would be an excellent signing for United or Chelsea if either club was able to beat Madrid to land the talented full-back this summer.