Chelsea take on Crystal Palace at Stamford Bridge on Saturday evening. Here is the side we think Antonio Conte will pick for the game:

Chelsea will be looking to get back to winning ways when they take on Crystal Palace at Stamford Bridge on Saturday evening.

Goalkeeper: Thibaut Courtois is certain to keep his place between the sticks once again with Willy Caballero on the bench.

Defence: Skipper Gary Cahill is expected to get a recall after losing his place in recent games with Antonio Rudiger the man most likely to make way.

Cesar Azpilicueta is likely to start once again unless Conte decides to give him a rest ahead of next weeks Champions League clash with Barcelona while Andreas Christensen should keep his place at the heart of the back three.

Midfield: N’Golo Kante has been passed fit to return having missed the defeat at Manchester City last weekend after fainting in training two days before the game.

Danny Drinkwater will be the man to make way as Cesc Fabregas is expected to keep his place in the middle of the park. Tiemoue Bakayoko is back in the squad after recovering from a calf injury but Conte has hinted he’s only fit enough for a place on the bench.

Ross Barkley is making good progress in his recovery from a hamstring injury but Conte has urged caution with the midfielder so he won’t feature this weekend.

Davide Zappacosta is pushing for a recall but Victor Moses should continue in the right wing-back spot while Marcos Alonso is also expected to keep his place meaning Emerson Palmeiri will be on the bench.

Attack: Eden Hazard was deployed in the false 9 role against City last weekend but Conte is expected to recall one of his strikers against Palace tomorrow evening. Alvaro Morata is favourite to lead the line up front meaning Olivier Giroud may have to settle for a place among the substitutes.

Hazard can then drop back in to a more natural attacking midfield role, unless Conte wants to give him a breather ahead of the trip to the Nou Camp, while Willian could get the nod over Pedro. 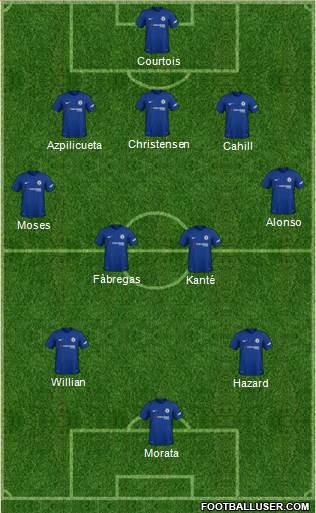