Premier League football returns as Liverpool take on Crystal Palace at Selhurst Park on Saturday. Here is the side I think Klopp will select for the game:

Premier League football returns after the international break as Liverpool take on Crystal Palace at Selhurst Park on Saturday afternoon.

Goalkeeper: Loris Karius has been Klopp’s first choice goalkeeper in recent months and I don’t see the Reds boss making any change this weekend so Simon Mignolet will once again start on the bench.

Defence: Joe Gomez picked up a knock while away on international duty with England so Trent Alexander-Arnold is expected to be recalled at right-back with Nathaniel Clyne still working his way back to full fitness.

Andrew Robertson also sustained a knock while away with Scotland but the left-back is expected to recover in time to face Palace meaning Alberto Moreno will miss out once again.

Dejan Lovren is a minor doubt with an ankle problem but I think he’ll be fit to get a recall alongside Virgil van Dijk with Joel Matip the man to make way on Saturday.

Midfield: Emre Can missed Germany’s recent friendlies with an on-going back injury but he should be fit to start against Palace while Jordan Henderson could keep his place in the middle of the park.

Alex Oxlade-Chamberlain is pushing for a recall after being named on the bench against Watford before the international break so Georgino Wijnaldum could make way.

James Milner and Adam Lallana are also hoping to be recalled to the starting eleven this weekend but I think they’ll have to make do with places on the bench.

Attack: Some have suggested Klopp may opt to rest some of his key men ahead of the Champions League quarter final with Manchester City on Wednesday night.

However, the Reds also have plenty to play for in the league so I don’t expect Liverpool to field a weakened team at Selhurst Park on Saturday afternoon.

Therefore, I fully expect to see Mohamed Salah, Sadio Mane and Roberto Firmino leading the attack with the likes of Dominic Solanke and Danny Ings on the bench. 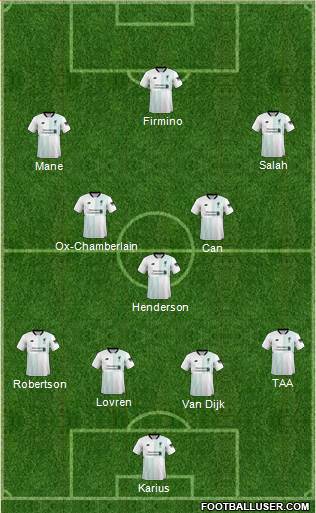