Tottenham Hotspur take on Chelsea at Stamford Bridge on Sunday afternoon. Here is the side we think Mauricio Pochettino will select for the game:

Goalkeeper: The Spurs boss used Michel Vorm during the FA Cup win over Swansea before the international break but Hugo Lloris is set for a recall on Sunday.

Defence: Toby Alderweireld is back in contention after recovering from a hamstring injury but I’m not convinced Pochettino is ready to rush him straight back in to his first team plans. Therefore, I think we could see Davinson Sanchez continue alongside Jan Vertonghen in the middle of the back four.

Serge Aurier and Danny Rose are pushing for recalls to the side but I think we’ll see Kieran Tripper and Ben Davies maintain their places in the full-back positions.

Midfield: Victor Wanyama is in contention to start in midfield after shaking off a knee problem but Eric Dier should keep his place in the middle of the park.

Moussa Sissoko started against Swansea before the international break but we should see Mousa Dembele recalled to the starting eleven at Stamford Bridge.

New Customers can get Chelsea at an enhanced 25/1 to beat Tottenahm or Tottenham to beat Chelsea at 40/1. Max Stake £1. Winnings paid in free bets. Full T&Cs Apply. 18+|Gamble Aware.

Pochettino may opt to play with three in midfield so we could see Christian Eriksen deployed in a deeper role alongside Dembele with the pair playing in front of Dier.

Attack: Tottenham will give Harry Kane every chance to prove his fitness ahead of this crucial game against top-four chasing Chelsea on Sunday.

The striker was initially ruled out for at least four weeks after damaging ankle ligaments at Bournemouth earlier this month but he’s made a swift recovery. Kane is unlikely to be fit to start but I wouldn’t rule out seeing him named among the subs.

In Kane’s absence, Hueng-min Son should lead the line up front ahead of Fernando Llorente with Dele Alli expected to support him in attack despite a dip in form of late.

Lucas Moura will be hoping to keep his place after a positive showing against Swansea last time out but I think Erik Lamela might get the nod on the right on Sunday. 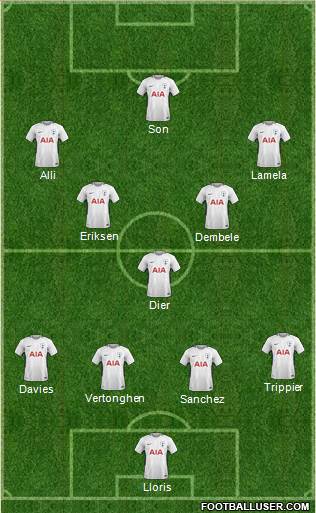