Premier League football returns as Chelsea welcome Tottenham to Stamford Bridge on Sunday. Here is the side we think Antonio Conte will pick for the game:

Goalkeeper: Thibaut Courtois will be handed a late fitness test because of a hamstring injury but the Belgian international is expected to be passed fit to return in goal after Willy Caballero started in the FA Cup win over Leicester two weeks ago.

Defence: Andreas Christensen is also a doubt due to muscle fatigue that hampered him during the international break but the young Danish centre-back is expected to once again start at the back.

Gary Cahill has fallen out of favour in recent games so Antonio Rudiger could keep his place in the back three while Cesar Azpilicueta is certain to start in defence. However, David Luiz has been ruled out for at least another three weeks with a knee injury.

Midfield: N’Golo Kante is expected to be retained in the middle of the park but I think we could see Cesc Fabregas recalled alongside the French international after he missed the FA Cup win.

Tiemoue Bakayoko will be the man to make way after his run out against Leicester last time out while Danny Drinkwater may have to make-do with a place among the substitutes.

New Customers can get Chelsea at an enhanced 25/1 to beat Tottenahm or Tottenham to beat Chelsea at 40/1. Max Stake £1. Winnings paid in free bets. Full T&Cs Apply. 18+|Gamble Aware.

Davide Zappacosta and Emerson Palmeiri are pushing for recalls but I think we’ll see Victor Moses and Marcos Alonso retain their places in the full-back positions against Spurs.

Attack: Olivier Giroud will be hoping to feature against Tottenham as he has a good record against them but Alvaro Morata was back among the goals during the win over Leicester so Conte will be tempted to stick with the Spanish international this weekend.

Conte has deployed Eden Hazard as a ‘false 9’ against rival top-four sides this season but I think we’ll see the Belgian super-star in a more natural attacking midfield role on Sunday.

Pedro will be hoping he’s done enough to force his way in to the starting eleven after scoring the winner last time out but I think Willian will keep his place as he’s been one of Chelsea’s best players in recent months. 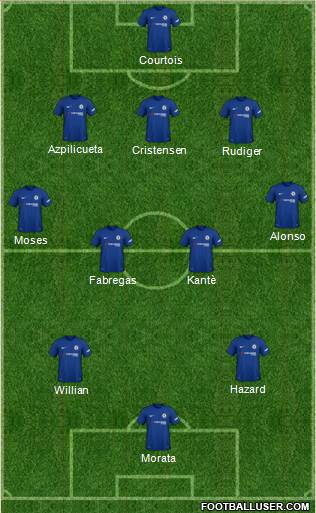