Arsenal take on CSKA Moscow in the Europa League at the Emirates this evening. Here is a preview with team news, line-ups and predicted score

Arsenal will be looking to put one foot in the semi-finals of the Europa League when we take on CSKA Moscow at the Emirates this evening.

We warmed up for the game with a comfortable 3-0 victory over Stoke City at the weekend but we still remain sixth in the Premier League table and have no chance of breaking in to the top four.

Therefore, our focus is firmly on the Europa League for the rest of the campaign as winning this competition will propel us back in to the Champions League next season.

We have a great chance of reaching the last four as CSKA Moscow are a mediocre side and we should be confident of beating them over two legs to progress to the next round.

We eased past AC Milan 5-1 in the last-16 phase but will need to be wary of CSKA as the Russian’s knocked out Lyon on away goals after drawing 3-3 on aggregate with the Ligue 1 outfit.

We’ve been boosted by the news that Petr Cech is fit and available for selection after recovering from a groin injury that kept him out of the Stoke game at the weekend.

However, it remains to be seen whether Arsene Wenger will recall the 35-year-old or stick with David Ospina – who’s played in every round of the Europa League so far.

Danny Welbeck has shaken off a minor knock while Alexandre Lacazette has been declared fit to start after making his goal-scoring return off the bench at the weekend.

However, Santi Cazorla remains sidelined with an on-going ankle injury while Pierre-Emerick Aubameyang is cup-tied.

CSKA have no fresh injuries to worry about but Viktor Vasin, Astemir Gordyushenko and Mario Fernandes all remain out while Kirill Nababkin is suspended. 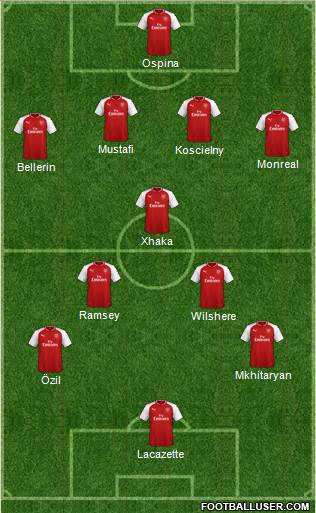 The game isn’t expected to be a sell out with many disgruntled Arsenal fans choosing to boycott the game or sell their ticket so you should still be able to buy tickets. If you can’t make it down to the game, you can still watch it from the comfort of your own home or down the pub as the match will be shown live on BT Sport with kick off set for 8.05pm.

Arsenal 3-0 CSKA Moscow: We weren’t at our best on Sunday but the players clearly had their minds focussed on this game. Lacazette’s return to fitness is a huge boost as he offers us real quality up front in the Europa League. We don’t want to be going to Russia needing a result so we have to try and put the tie to bed on home soil. I think we’ll see a top performance from Arsenal tonight and hopefully we can ease to a 3-0 win.