Arsenal take on Southampton at the Emirates Stadium on Sunday afternoon. Here is the side think Arsene Wenger will select for the game:

Arsenal will look to put their Europa League exploits behind them when we take on Southampton at the Emirates on Sunday.

We have a huge quarter-final second leg with CSKA Moscow coming up on Thursday so I think we’ll see plenty of changes tomorrow. Here is the side think Arsene Wenger will select for the game:

Goalkeeper: David Ospina has been ruled out for up to three weeks with an ankle injury so Petr Cech will continue between the sticks.

Defence: Wenger opted to rest Laurent Koscielny against Stoke last weekend and I think we’ll see the French international left out again tomorrow to protect him ahead of the trip to Russia.

Calum Chambers in the man most likely to come in as he performed well against the Potters last week so he could line-up alongside Shkodran Mustafi.

Hector Bellerin is expected to continue at right-back but we may see Nacho Monreal rested with Sead Kolasinac given a run-out at left-back.

Midfield: Aaron Ramsey was excellent against CSKA Moscow on Thursday night and I’d be surprised if he wasn’t given a breather ahead of the decisive second leg.

That could see Mohamed Elneny come in to start alongside Granit Xhaka in the middle of the park while I think Jack Wilshere may get a rest as he didn’t look 100% fit to me on Thursday night.

Attack: Pierre-Emerick Aubameyang is set for a recall after being ineligible to play in Europe and the Gabon international will be hoping to build on his brace against Stoke.

Alexandre Lacazette has looked in good form since returning from injury but I think he should be rested ahead of the CSKA game so I’d be surprised not to see him on the bench tomorrow.

Mesut Ozil was outstanding in our Europa League first leg win and Wenger rarely rests the German international so no doubt he’ll continue in attack against Southampton.

Henrikh Mkhitaryan has been ruled out after suffering a knee injury in midweek so Danny Welbeck could get a recall in attack while Alex Iwobi may also get a chance to impress. 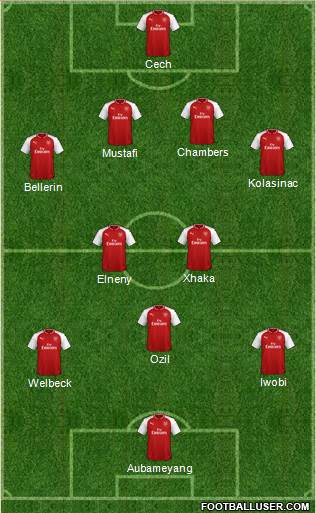