Manchester United welcome West Bromwich Albion to Old Trafford on Sunday afternoon. Here is the team I think Jose Mourinho will pick for the game:

Manchester United will look to tighten their grip on second place when they welcome West Bromwich Albion to Old Trafford on Sunday afternoon.

Goalkeeper: David De Gea produced another excellent performance during the win at Man City last weekend and he’s certain to keep his place between the sticks with Sergio Romero out with a knee injury.

Defence: Victor Lindelof could be recalled as Mourinho has been rotating him and Eric Bailly lately so the Ivory Coast international may drop to the bench with Chris Smalling keeping his place following his heroics at the Etihad.

Antonio Valencia should once again start at right-back but Mourinho may decide to give Ashley Young a rest so Marcos Rojo could start at left-back as he seems to be ahead of Luke Shaw in the pecking order.

Nemanja Matic will also retain his place in the middle of the park and I think we might see Mourinho switch to a two-man midfield so Ander Herrera may drop back to the bench on Sunday despite his superb assist against City.

Attack: Alexis Sanchez produced an encouraging performance in the second half at the Etihad so the Chilean international should keep his place in the attack against West Brom.

Romelu Lukaku will once again lead the line up front but I think Mourinho might take the opportunity to freshen things up with Jesse Lingard dropping back to the bench.

That could see Juan Mata recalled while Marcus Rashford may get the nod ahead of Anthony Martial amid rumours both players are becoming unsettled due to a lack of regular starts. 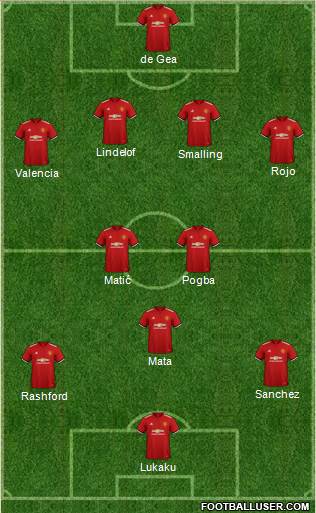