Chelsea take on Swansea at the Liberty Stadium on Saturday evening. Here is the side we think Antonio Conte will pick for the game:

Chelsea will be looking to keep the pressure on Tottenham with a win when they take on Swansea at the Liberty Stadium on Saturday evening.

Goalkeeper: Willy Caballero was selected for the FA Cup semi-final win over Southampton but we should see No.1 Thibaut Courtois recalled between the sticks this weekend.

Defence: Andreas Christensen is pushing for a recall after being left out of the starting eleven last week and Antonio Rudiger could be the man most likely to make way.

That’s because Gary Cahill has been back in favour in recent game so the Blues skipper could keep his place at the back along with Cesar Azpilicueta. David Luiz and Ethan Ampadu remain on the sidelines through injury.

Midfield: Marcos Alonso is still unavailable as he continues to serve his three-game suspension so Emerson Palmeiri should continue in the left wing-back role having impressed in recent games.

Conte may decide to freshen things up with on the right wing with Davide Zappacosta pushing to replace Victor Moses while Tiemoue Bakayoko could come in for Cesc Fabregas alongside N’Golo Kante in the middle of the park.

Attack: Olivier Giroud continued his fine recent form with the opening goal during the FA Cup semi-final win over Southampton last weekend so he’ll be hoping to retain his place.

However, Alvaro Morata came off the bench to score the second goal so there is competition for places up front and Conte may decide to give Morata a run-out and keep Giroud fresh.

Eden Hazard is certain to keep his place in attack while Willian is favourite so join the Belgian international with the likes of Pedro and Ross Barkley having to make do with a place among the substitutes. 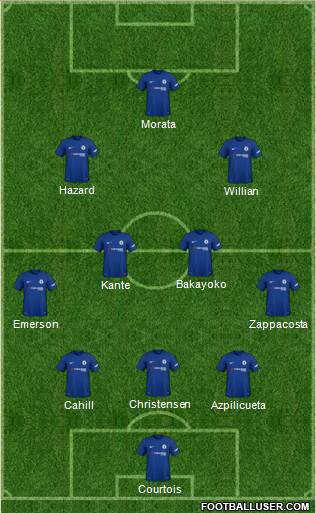