Manchester United take on Brighton at the Amex Stadium on Friday night. Here is the team I think Jose Mourinho will pick for the game:

Manchester United will be hoping to secure second place in the table with a win when they take on Brighton at the Amex Stadium on Friday night.

Goalkeeper: David De Gea is certain to keep his place in goal as he’s one of the best goalkeepers in the world. Plus, Sergio Romero is still out with a knee injury.

Defence: Mourinho could make one change to the back four that faced Arsenal with Phil Jones expected to be recalled after recovering from a minor knock that kept him out last weekend.

Victor Lindelof is the man most likely to make way as Chris Smalling should keep his place while Antonio Valencia should also once again start at right-back ahead of Matteo Darmian.

Luke Shaw is pushing for a recall at left-back but I think we’ll see Ashley Young keeping his place while Mourinho has given a bizarre reason for axing Eric Bailly recently after claiming he’s not playing the Ivory Coast international because he won’t be going to the World Cup.

Midfield: Paul Pogba got himself on the scoresheet against Arsenal on Sunday so he should retain his place alongside Nemanja Matic in the middle of the park.

Marouane Fellaini will be hoping to start after coming off the bench to score a late winner against the Gunners but I think Ander Herrera will keep his place tomorrow night.

Attack: Alexis Sanchez will no doubt start in attack once again but we could see Mourinho freshen things up on the opposite flank with Juan Mata or Anthony Martial coming in for Jesse Lingard.

Romelu Lukaku has been ruled out after suffering an ankle injury during the win over Arsenal. It’s not clear how long the Belgian international will be out for but Mourinho is confident he’ll be back for the FA Cup final later this month.

So United have a void to fill up front and I think we’ll see Marcus Rashford come in to lead the attack up front. 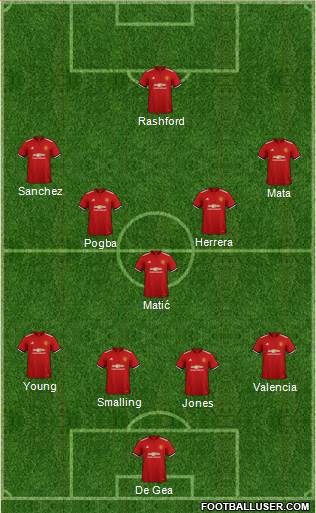