The summer transfer window is in full swing and managers are working hard on their transfer targets so we’ll bring you all the latest gossip from around the globe. Today, the latest on Liverpool and Chelsea’s pursuit of Alisson Becker…

Alisson Becker’s agent has hinted that a move to Liverpool could be on the cards as he prepares to put forward an offer to Roma for the Chelsea target, according to reports in Italy via the Express.

Alisson has developed in to one of the best goalkeepers in Europe since joining Roma from Inter Milan two years ago and he played a key role in their march to the Champions League semi-finals last season while he was also selected as Brazil’s No.1 at the recent World Cup finals.

The 25-year-old’s excellent form has attracted interest from some of Europe’s top clubs with the Express reporting that Liverpool, Chelsea and Real Madrid have all been battling it out over his signature this summer.

Recent speculation suggests Madrid have pulled out of the race for Alisson leaving Liverpool and Chelsea to go head-to-head over a deal which is expected to cost in excess of £60m.

It seems the situation could become clearer over the next 24 hours as the Express are citing a report from Gianluca Di Marzio that claims Alisson’s agent, Ze Maria Neis, will meet with Roma chiefs today and put forward an offer from an unnamed club.

The Sky Sports Italia journalist says Neis will hold formal talks at Roma’s training base to resolve the keeper’s future and a move away from the Stadio Olimpico looks increasingly likely as they’re already lining-up Robin Olsen as a potential replacement.

Alisson dropped a huge hint that he’s set for a move this summer and sent Liverpool and Chelsea fans into a frenzy after removing Roma from his Instagram bio on Monday night.

The player’s agent then fuelled speculation that the South American is heading to Liverpool over Chelsea after liking a photoshopped image of Alisson in a Liverpool kit on Instagram. 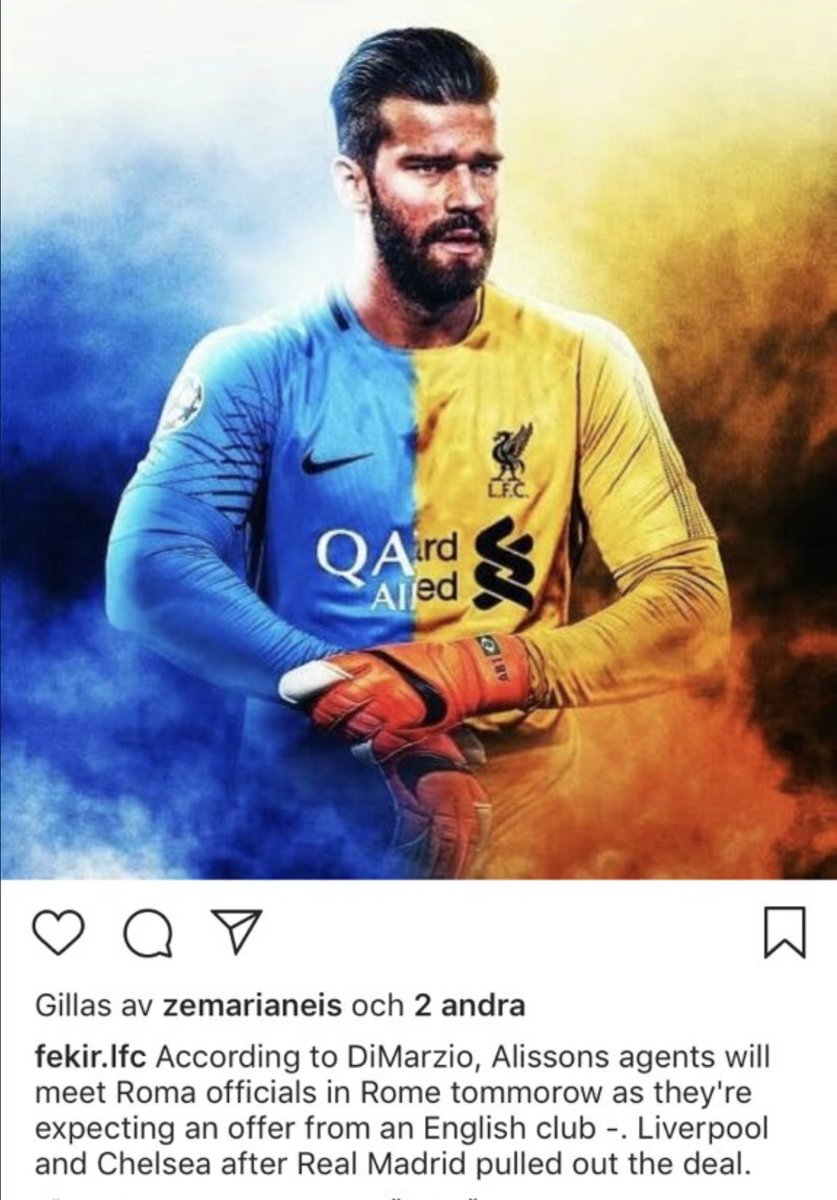 It looks like it’s going to be a pivotal day in this transfer saga and a move to the Premier League is becoming a distinct possibility with Liverpool and Chelsea vying for Alisson’s signature.

Jurgen Klopp is in the market for a new No.1 after Loris Karius made two costly mistakes during Liverpool’s defeat to Real Madrid in the Champions League final and Alisson has been touted as his prime target.

However, Chelsea have also identified the Brazilian star as a potential replacement for Thibaut Courtois as the Belgian is being strongly linked with a move back to Spain after refusing to sign an extension to his contract – which has just one year remaining.

We’ll have to see how things progress over the coming hours but Alisson would be an excellent signing for Liverpool or Chelsea if either club was able to get a deal agreed for his signature.