Manchester United have launched an £11.6m bid to sign Liverpool target Yusuf Yazici but Trabzonspor are holding out for more this summer

There is plenty of Manchester United-related gossip doing the rounds in the papers with the Red Devils linked with a whole host of star names. Today, United are linked with Liverpool target Yusuf Yazici…. 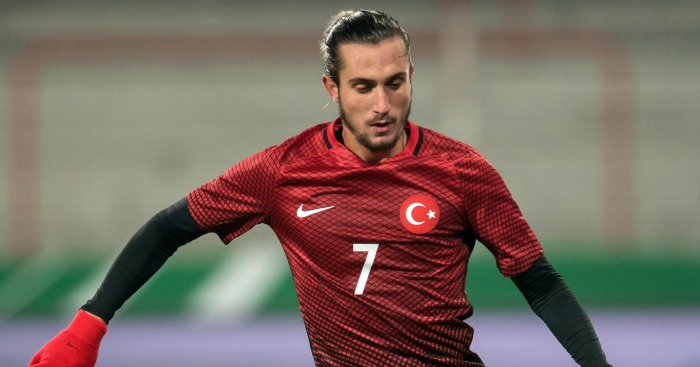 Manchester United have launched an £11.6m bid to sign Liverpool target Yusuf Yazici but Trabzonspor are holding out for more this summer, according to reports in Turkey via TeamTalk.

Yazici has been at Trabzonspor his entire career having joined the clubs youth ranks as a youngster and progressed through the system before breaking in to the first team set-up in 2015. The 21-year-old has become an important player for the Turkish giants having provided 18 goals and 18 assists in his 66 appearances so far.

Yazici has also become a regular in the senior Turkish squad with 9 caps so far having  previously represented his country at U19 and U21 level and his potential has caught the attention of top clubs here in the Premier League.

TeamTalk claim that Liverpool are among the clubs to have registered their interest in signing the highly-rated midfielder as Jurgen Klopp continues to further strengthen his ranks following an impressive summer recruitment drive.

However, it seems Manchester United have stolen a march on their rivals as TeamTalk are citing a report from Turkish outlet Haberturk that claims the Red Devils have tabled an opening bid worth £11.6m for Yazici’s signature.

Jose Mourinho has been relatively prudent in the market so far having only brought in three new faces with third-choice goalkeeper Lee Grant and young defender Diogo Dalot arriving in recent weeks along with Brazilian international midfielder Fred.

The United boss is expected to make further additions before the start of the season and it looks like Yazici has been identified as a potential star for the future by the clubs scouting department.

However, United will have to dig a little deeper if they want to sign the Turkish international as the report says Trabzonspor have already rejected their bid out of hand.

Haberturk, via TeamTalk, claim the midfielder is keen to make a move to the Premier League but the Trabzonspor president Ahmet Agaoglu made it clear they want Yazici to stay for at least another year.

We’ll have to wait and see how things progress or if United go back in with an improved bid but Yazici looks to have a bright future ahead of him so he’d be an exciting signing for whoever ends up buying him.