Arsenal kick off their 2018/19 campaign when they welcome Man City to the Emirates on Sunday. Here is the side I think Unai Emery will select

Arsenal kick off their 2018/19 campaign when they welcome Man City to the Emirates on Sunday afternoon. Here is the side I think Unai Emery will select for the game:

Goalkeeper: Bernd Leno has arrived from Bayer Leverkusen this summer and is expected to be our long-term No.1. However, Petr Cech has performed well in pre-season and many national newspapers are suggesting he’ll be given the gloves tomorrow. Personally I’d prefer to see Leno come straight in but it’s a big call from Emery if he sticks with Cech.

Defence: Laurent Koscielny is obviously out with a long-term Achilles injury and Calum Chambers has been sent on loan to Fulham for the season. Sokratis is set to make his Premier League debut following his move from Borussia Dortmund this summer and it looks like Shkodran Mustafi will be his partner in defence while Koscielny is out.

Kostantinos Mavropanos and Rob Holding will be out back-up over the coming months while Hector Bellerin is expected to keep his place at right-back despite the arrival of Stephan Lichtsteiner this summer.

Sead Kolasinac has been ruled out for around two months with a knee injury while Nacho Monreal is lacking match fitness after recently recovering from his own knee problem so Ainsley Maitland-Niles is set to start at left-back.

Midfield: Aaron Ramsey is in contention after recovering from a minor calf injury that kept him out of the friendlies with Chelsea and Lazio so he should start in midfield.

It’s going to be interesting to see how Emery sets-up. I think in the majority of games he’ll go with 4-2-3-1 but against the top sides like City he may opt for an extra body in the middle of the park and go 4-3-3.

Granit Xhaka should start and we could see the best of him now that he won’t have the defensive duties quite so much following the arrival of Lucas Torreira. The Uruguayan international is a specialist holding midfielder and although he may not be 100% match fit yet, I think we’ll see him make his debut tomorrow.

Attack: A 4-3-3 means an attacker will need to be sacrificed and it looks like Alexandre Lacazette will be the man to miss out with Pierre-Emerick Aubameyang leading the line up front. In an ideal world both would start but I’m not sure we can afford that luxury against a team like Man City.

Mesut Ozil is certain to start and this formation may see him playing off the right wing. It’s not his best position but he can be extremely dangerous coming from wide – let’s just hope he’s up for his defensive duties too.

Henrikh Mkhitaryan is likely to make-up the front three with the likes of Danny Welbeck, Alex Iwobi and Reiss Nelson vying for places on the bench. 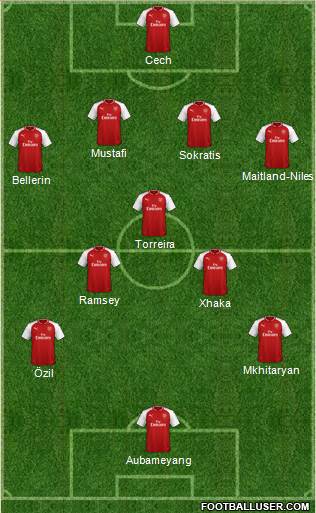