Arsenal take on Watford at the Emirates Stadium on Saturday afternoon. Here is the side Gooner Mac thinks Unai Emery will select for the game:

Arsenal will be hoping to make it five consecutive Premier League victories in a row when we take on Watford at the Emirates Stadium on Saturday afternoon. Here is the side Gooner Mac thinks Unai Emery will select for the game:

Goalkeeper: Bernd Leno didn’t do enough against Brentford in midweek to convince Emery to stick with him. The German almost conceded a calamity own goal early on and questions were asked over his attempt to save the Brentford free-kick so I expect Petr Cech will be recalled between the sticks tomorrow afternoon.

Defence: Emery is expected to make at least two changes in defence with Hector Bellerin coming back in at right-back in place of Stephan Lichtsteiner while Sokratis is set to replace Rob Holding after recovering from a dead leg that he sustained against Everton last week.

Shkodran Mustafi looked shaky again on Wednesday night but he’s still likely to keep his place in the defence. Sead Kolasinac made his comeback from injury after being named on the bench in midweek but Nacho Monreal should once again start at left-back.

Midfield: Lucas Torreira started Arsenal’s Premier League game with Everton last weekend and was a substitute against Brentford so the South American is expected to be recalled to the starting eleven tomorrow afternoon meaning Matteo Guendouzi is set to drop out.

Granit Xhaka also got a breather in the Carabao Cup so the Switzerland international is set to come back in to the midfield with Mohamed Elneny making way after another average performance in midweek.

Attack: Aaron Ramsey has been deployed in the advanced central midfield role in recent weeks. I personally don’t think this is his best position and it will be interesting to see if Emery continues to select him amid reports that contract talks have collapsed. However, I expect Ramsey to be recalled against Watford tomorrow.

That will most likely mean Mesut Ozil starting on the wing again with the German international set for a recall following his rest in midweek while Pierre-Emerick Aubameyang is also expected to come back in to the starting eleven after being rested against Brentford.

Alex Iwobi, Henrikh Mkhitaryan and Emile Smith Rowe are all set to drop out after featuring in the League Cup while Danny Welbeck could also find himself back on the bench despite scoring twice on Wednesday night.

Alexandre Lacazette came off the bench to score the third goal and the French international is expected to resume his role as our lead striker tomorrow. 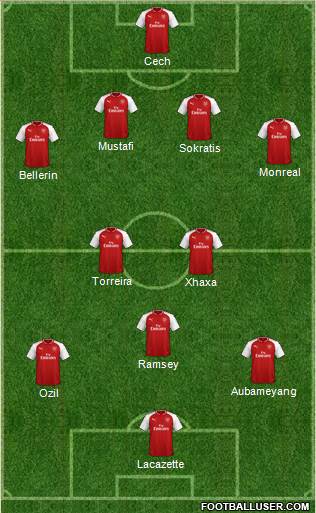