Chelsea take on Vidi in Hungary on Thursday in the group stages of the Europa League. Here is the side I think Maurizio Sarri will select for the game:

Chelsea take on Vidi FC in Hungary on Thursday evening knowing top spot and progress to the knockout stages of the Europa League have already been secured. Here is the side I think Maurizio Sarri will select for the game:

Goalkeeper: First choice keeper Kepa has been left in West London to rest ahead of Chelsea’s trip to Brighton on Sunday so Willy Caballero is set for a rare run out between the sticks.

Defence: Marcos Alonso and David Luiz have made the trip but Sarri is expected to make wholesale changes to his back four so I think they’ll be on the bench while Antonio Rudiger and Cesar Azpilicueta have been left at home so they’ll be given a well-earned rest.

Davide Zappacosta and Emerson Palmeiri are expected to start in the full-back positions while Andreas Christensen should come in to the middle of the Chelsea defence. However, Gary Cahill has been ruled out through injury so youngster Ethan Ampadu is set to be given a chance to impress.

Midfield: N’Golo Kante has been left in the UK to rest while Mateo Kovacic has been ruled out through injury so there will be changes in midfield. Ross Barkley and Ruben Loftus-Cheek are in-line for recalls in the middle of the park.

Jorginho has been virtually ever-present for Chelsea this season so the Italian international is expected to be given a breather with Cesc Fabregas coming in to the deep-lying playmaker role.

Attack: Unsurprisingly, Eden Hazard hasn’t been risked as he’s been left at home to rest ahead of the Brighton game and Sarri has suggested that youngster Callum Hudson-Odio will be given a chance in attack so he’ll be desperate to impress.

Both Olivier Giroud and Alvaro Morata were left on the bench for Chelsea’s 2-0 win over Manchester City at the weekend so it will be interesting to see who comes in tomorrow. I think Giroud might be the man to get the nod with Morata saved for Brighton.

Sarri also has a decision to make over Willian and Pedro in the final attacking position. The duo have interchanged throughout the season but I think we may see Willian starting against Vidi which means Pedro could be favourite to start at the weekend.

The confirmed squad was announced on Chelseafc.com: 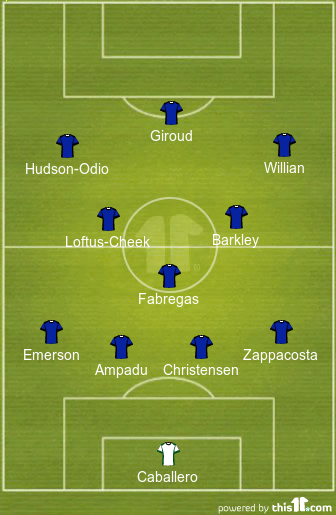