Here is our match preview ahead of Arsenal’s Europa League clash with Qarabag including team news, expected line-ups and predicted score

Arsenal will look to wrap-up the Europa League group stages in style when we welcome Qarabag to the Emirates Stadium this evening.

Unai Emery’s side are guaranteed to progress to the last-32 of the competition as Group E winners after beating Vorskla 3-0 in Ukraine two weeks ago so tonight’s game is pretty-much a dead rubber for Arsenal.

However, we do want to extend our unbeaten run after making it 21 matches without defeat following our 1-0 victory over Huddersfield Town last weekend so the players still have something to play for this evening.

Qarabag come in to the game sitting bottom of the group – level on 3 points with Vorskla with a worse goal difference – so they have very little left to play for but they could take third spot if they get a positive result at the Emirates and Sporting do them a favour in Portugal.

Emery will once again rest our big guns with the likes of Hector Bellerin, Granit Xhaka, Lucas Torreira, Pierre-Emerick Aubameyang and Alexandre Lacazette given a breather ahead of Sunday’s Premier League trip to Southampton.

Laurent Koscielny will make his first start of the season after recovering from an Achilles injury while Sokratis could feature as he’s suspended at the weekend.

Shkodran Mustafi is out with a hamstring injury so he joins Danny Welbeck and Dinos Mavropanos on the sidelines while Emile Smith Rowe has been ruled out after picking up a knock in training this week.

Youngsters Joe Willock and Eddie Nketiah should start while Tyreece John-Jules, Zech Medley, Charlie Gilmour, Dominic Thompson and Buyaka Sako could be named on the bench. 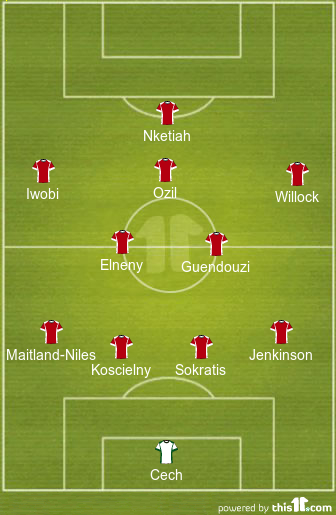 Arsenal 2-0 Qarabag: We come in to the game in fine form won the reverse fixture 3-0 in Azerbaijan earlier in the season. Qarabag have also lost six of their last seven games in the Europa League so even with a severely weakened side I can’t see past a home win. Let’s hope Nketiah gets on the score-sheet in a 2-0 win.