Arsenal have savaged Henrikh Mkhitaryan on social media after he missed a crucial chance during the 2-0 Carabao Cup quarter-final defeat to Tottenham. 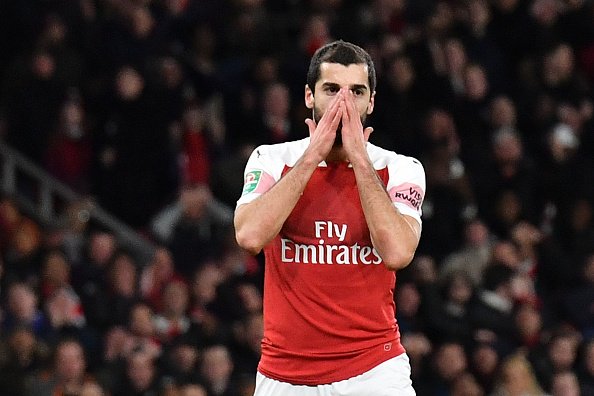 Some Arsenal have savaged Henrikh Mkhitaryan on social media after he missed a crucial chance during the 2-0 Carabao Cup quarter-final defeat to Tottenham Hotspur.

Mkhitaryan was once again preferred in attack ahead of Mesut Ozil on Wednesday night with Arsenal boss Unai Emery leaving the German playmaker out of the entire 18-man squad for ‘tactical reasons’.

The decision was met by bemusement among the Arsenal fans but their confusion turned to anger after Mkhitaryan missed a golden opportunity to open the scoring against Spurs last night.

The Armenian international came in to the game after scoring a brace against Southampton last weekend so he should have been full of confidence in front of goal.

However, Mkhitaryan’s goal-scoring touch deserted him as he saw his effort from 18 yards well saved by Paulo Gazzaniga when through on goal following a lovely one-two with Aaron Ramsey on the edge of the area.

That miss proved crucial as Tottenham went up the other end to open the scoring through Heung-min Son just minutes later and Mauricio Pochettino’s men wrapped up the win with a second half Dele Alli strike.

Many Arsenal players weren’t at their best last night but some fans vented their anger towards Mkhitaryan for his huge miss with a selection of supporters demanding the attacker is sold in January while others branded him ‘useless’.

Mkhitaryan arrived at Arsenal in a straight swap deal last winter with Alexis Sanchez heading in the opposite direction to Manchester United and some fans feel the move just hasn’t worked out.

Check out what fans have been saying here:

Mkhi and Iwobi need to leave in January FFS!!! #AFC

mkhi is still useless, how do you miss one on one

Mkhi is useless 90% of the time

Mkhi stinking up the gaff again

Mkhitaryan playing instead of Ramsey and Özil is such a joke. He is awful man.

How is Mkhitaryan still starting games for us. He's awful.

The Sanchez-Mkhitaryan swap was a waste of everyone’s time. We both should’ve disposed of our own rubbish.

Mkhitaryan has missed way too many sitters.
Its getting criminal now!