Chelsea take on Crystal Palace at Selhurst Park on Sunday afternoon. Here is the side I think Maurizio Sarri will select for the game:

Chelsea will be looking to cement their position in the top four with a win when they take on Crystal Palace at Selhurst Park on Sunday afternoon. Here is the side I think Maurizio Sarri will select for the game:

Goalkeeper: I don’t think there is much debate over who will start in goal as summer signing Kepa is certain to retain the gloves ahead of Willy Caballero this weekend.

Defence: Chelsea are unlikely to tinker too much in defence so I expect Sarri to go with his favoured back four for this tricky away game meaning Cesar Azpilicueta should continue at right-back ahead of Davide Zappacosta while Marcos Alonso will keep his place at left-back with Emerson Palmeiri once again on the bench.

Andreas Christensen is a doubt with a hamstring injury that kept him out of the Boxing Day win at Watford so I don’t see Sarri making any changes in the middle of defence. David Luiz should therefore partner Antonio Rudiger with the out-of-favour Gary Cahill once again on the bench.

Midfield: Jorginho is almost certain to start in the deep-lying playmaker role once again so Cesc Fabregas will have to make-do with a place on the bench while N’Golo Kante is expected to retain his place in the middle of the park.

However, Sarri might be tempted to freshen things up slightly with Ross Barkley pushing to be recalled so Mateo Kovacic may be given a breather by the Chelsea boss.

Attack: Pedro has been ruled out for ten days with a hamstring injury that he picked up against Watford in midweek while Callum Hudson-Odoi has also been ruled out of Chelsea’s trip to Palace.

Eden Hazard has been deployed in the ‘false 9’ role in recent games and bagged both goals against Watford but with Pedro and Hudson-Odoi ruled out, Sarri is low on wide options so we might see the Belgian international back on the wing this weekend.

Sarri may also be concerned about the aerial threat of Palace so Olivier Giroud could be recalled to offer some height and physical presence to the Chelsea team. Willian should keep his place in the attack. 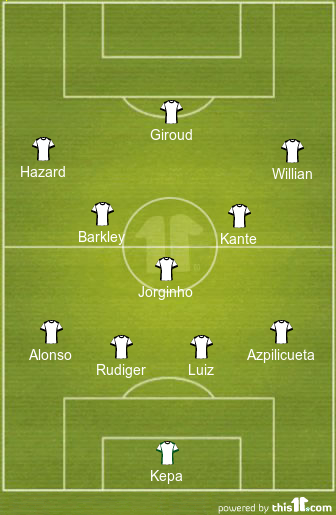