Arsenal host Fulham at the Emirates on New Year’s Day. Here is the side Gooner Mac thinks Unai Emery will select for the game:

Arsenal will be looking to bounce back from their Anfield nightmare when they host Fulham at the Emirates on New Year’s Day. Here is the side Gooner Mac thinks Unai Emery will select for the game:

Goalkeeper: Bernd Leno shipped five goals against Liverpool but surprisingly he was nowhere near our worst player on the day as he was left exposed by a woeful defence – not to mention two of the goals were penalties. It’s been a tough few weeks for the German but I think Emery will stick with him.

Defence: Arsenal’s defence was ripped apart on several occasions at Anfield and it’s clear we need some major surgery at the back over the coming months. However, we can only choose from the players available now and hopefully Nacho Monreal is back in contention. The Spaniard has recovered from a hamstring injury and just missed out against Liverpool so he could return on the left of the back three versus Fulham.

Sokratis and Shkodran Mustafi were awful against Liverpool but Laurent Koscielny is still working his way back to full fitness following seven months out so I think Emery will stick with them on Tuesday afternoon.

Midfield: A switch in formation to a back three will see Sead Kolasinac move in to the left wing-back position while I think Ainsley Maitland-Niles did enough at Anfield to keep his place with Stephan Lichtsteiner dropped after a horror-show on Saturday.

Lucas Torreira has looked knackered in recent games so I wouldn’t be surprised to see him rested against Fulham with Matteo Guendouzi coming in alongside Granit Xhaka.

Attack: Mesut Ozil wasn’t involved against Liverpool due to an apparent injury and Emery gave little away about the problem during his post-match press conference so we can only assume the playmaker won’t be involved against Fulham.

Alexandre Lacazette was unfortunate to be left on the bench on Saturday so I think we’ll see the Frenchman recalled with Emery opting to go with two up front against Fulham.

Pierre-Emerick Aubameyang had a frustrating evening against Liverpool but he’ll be hoping to get back among the goals on New Year’s Day and he’ll benefit from having Lacazette alongside him.

With Ozil out and Henrikh Mkhitaryan missing for six weeks with a fractured foot, Emery may give Aaron Ramsey another chance to impress in the attacking midfield role. Alex Iwobi is likely to make way if the Arsenal boss reverts to two up front. 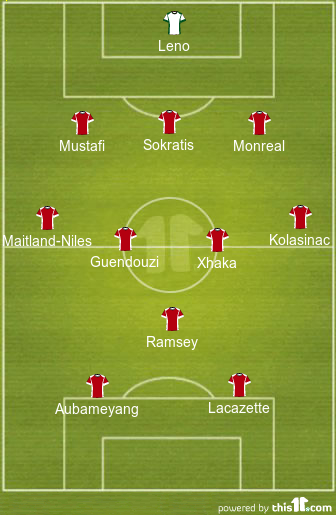