Manchester United take on Newcastle United at St James’ Park on Wednesday evening. Here is the line-up I think Ole Gunnar Solskjaer will go with:

Manchester United will look to continue their fine recent form when they take on Newcastle United at St James’ Park on Wednesday evening. Here is the line-up I think Ole Gunnar Solskjaer will go with:

Goalkeeper: I don’t think there is any debate over who will start in goal for Man Utd tomorrow as David De Gea is certain to keep the gloves with Sergio Romero once again on the bench.

Defence: Solskjaer will have to make at least one change in defence as Eric Bailly is suspended after being sent off during the closing stages of United’s win over Bournemouth on Sunday afternoon. Chris Smalling is still out with a foot injury and Marcos Rojo isn’t match fit yet so Phil Jones will be recalled alongside Victor Lindelof.

Luke Shaw is likely to continue at left-back while Ashley Young may be given another run-out at right-back – although Diogo Dalot is an option if Solskjaer wants to freshen things up.

Midfield: Paul Pogba continued his excellent form under Solskjaer with another two goals against Bournemouth so the French international is expected to keep his place in midfield while Nemanja Matic is also likely to start having improved his form in recent games.

Fred is pushing for a recall after being left out against Bournemouth while Marouane Fellaini is also an option for Man Utd in the middle of the park but I think Ander Herrera may keep his place after a terrific showing at the weekend.

Attack: Marcus Rashford was excellent against Bournemouth but Solskjaer confirmed after the game the young striker is suffering from fatigue after being taken off in the second half so he may be given a well-earned rest.

Romelu Lukaku made his return to action with a goal off the bench on Sunday having missed the previous two games so the Belgian international could be given a recall against Newcastle tomorrow.

Alexis Sanchez will be in the squad after recovering from a hamstring injury but Solskjaer is unlikely to throw him straight back in to action after over a month on the sidelines so the Chilean international may have to make do with a place on the bench.

Anthony Martial could keep his place in the attack having produced some excellent form under Solskjaer but Juan Mata may get a recall at St James’ Park with Jesse Lingard given a breather. 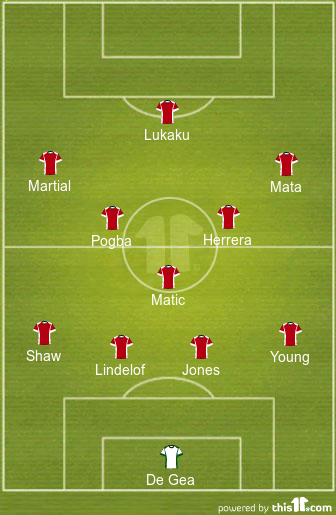