This is our match preview ahead of Arsenal’s FA Cup third round clash with Blackpool including team news, expected line-ups and predicted score

Arsenal will be looking to avoid an upset when we take on Blackpool at Bloomfield Road in the 3rd round of the FA Cup on Saturday evening [5.30pm KO].

We head into the game off the back of a much-needed 4-1 victory over Fulham on New Year’s Day that saw us bounce back from disappointing results against Liverpool and Brighton either side of Christmas.

Chelsea’s draw with Southampton means we now sit just three points behind them in fifth place in the Premier League table so we’re right in the mix for the Champions League qualification places.

However, it’s FA Cup matters at hand this weekend as Unai Emery gets his first taste of the world oldest domestic football cup competition and we face a tricky trip to Blackpool on Saturday evening.

We’ve already met the League One side this season having beaten them 2-1 in the third round of the Carabao Cup at the Emirates but Arsenal should be expecting a much different atmosphere at Bloomfield Road tomorrow.

Emery is set to make wholesale changes to his starting eleven with our key men given a rest following the hectic festive period so we should see the likes of Petr Cech, Stephan Lichtsteiner, Carl Jenkinson, Mohamed Elneny and Aaron Ramsey given recalls.

The boss has also suggested that youngsters Emile Smith Rowe, Buyako Saka, Eddie Nketiah and Joe Willock will feature having been involved in the Europa League group stages this season.

However, Mesut Ozil is set to miss out with a knee injury that’s hampered him for the last two games and Shkodran Mustafi is still nursing a hamstring problem. Hector Bellerin and Nacho Monreal are back in training after recovering from their respective injuries but they’re unlikely to be risked against Blackpool.

Konstantinos Mavropanos is also back in full training but this game will come too soon after months on the sidelines while Henrikh Mkhitaryan, Danny Welbeck and Rob Holding are long-term absentees.

As for Blackpool, they’ll be without Jordan Thompson due to suspension while Curtis Tilt, Oliver Turton, Mark Cullen and Jimmy Ryan will all miss out. Max Clayton is also a doubt with a hamstring injury. 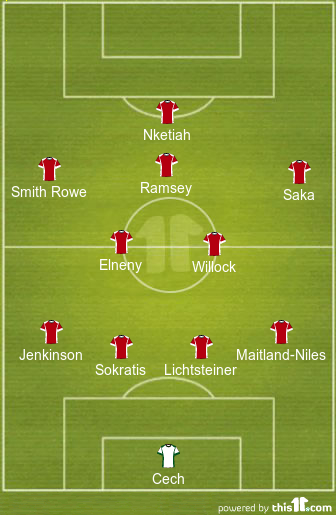 Blackpool 1-2 Arsenal: I’m expecting a good old fashioned FA Cup tie tomorrow evening and this could be a very tricky game if Emery fields a severely weakened side, as expected. Blackpool are mid-table in League One but they’ll be well up for this game in front of their home fans and Emery needs to have the players prepared for a battle, especially the youngsters. However, I still think we should have too much quality for Blackpool in the end and am backing us to edge it 2-1.