Here is our match preview ahead of Chelsea’s FA Cup third round clash with Nottingham Forest including team news, expected line-up and predicted score

Chelsea will be looking to book their place in the fourth round of the FA Cup when they take on Nottingham Forest at Stamford Bridge on Saturday afternoon.

The Blues head in to the game off the back of a disappointing 0-0 draw with Southampton that has seen their lead over fifth-placed Arsenal cut to just three points in the Premier League table so the race for Champions League qualification is hotting-up.

However, it’s FA Cup matters that are the focus this weekend and Chelsea boss Maurizio Sarri will get his first taste of the worlds oldest club football competition when he welcomes Nottingham Forest to west London tomorrow.

The visitors currently sit seventh in the Championship table after winning just one of their last six league games so boss Aitor Karanka will be desperate to secure a morale-boosting result at Stamford Bridge this weekend.

Chelsea will be without Olivier Giroud once again as the striker is still nursing an ankle injury while Pedro is also on the sidelines with a hamstring issue – although they could return for the Carabao Cup semi-final with Tottenham next week.

Willian is also expected to miss out after being forced off against Southampton in midweek with a muscle issue but Mateo Kovacic is set to return from illness and Callum Hudson-Odoi is available after overcoming a minor hamstring problem.

Sarri will rest a number of his key men ahead of the trip to Wembley so the likes of Davide Zappacosta, Andreas Christensen and Ruben Loftus-Cheek are all expected to feature while Cesc Fabregas and Gary Cahill could also get recalls despite reports linking them with moves away from the club.

Forest will be without Michael Hefele due to an Achilles injury while Michael Dawson is also still on the sidelines. Lewis Grabban is a major injury doubt but Ben Osborn could start after making his return from injury this week. 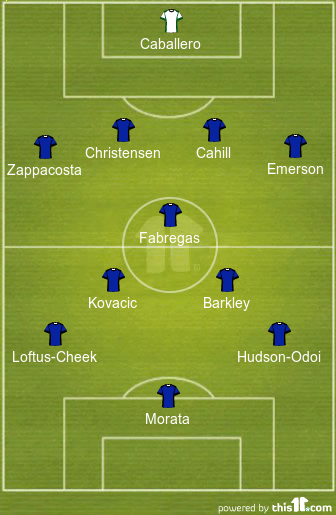 Chelsea 2-0 Nottingham Forest: Chelsea have been struggling for goals in recent games but Forest have kept just one clean sheet in their last six matches so the Blues should be able to create plenty of opportunities tomorrow. The FA Cup is sure to have it’s fair share of upsets this weekend, but I can’t see one in west London. I’m going for a routine Chelsea win.