Chelsea take on Newcastle United at Stamford Bridge on Saturday evening. Here is the side I think Maurizio Sarri will select for the game:

Chelsea will look to cement their place in the top four with a win when they take on Newcastle United at Stamford Bridge on Saturday evening. Here is the side I think Maurizio Sarri will select for the game:

Goalkeeper: Kepa gave away the decisive penalty during the League Cup semi-final first leg defeat to Tottenham on Tuesday night but the Spaniard is certain to keep his place between the sticks this weekend with Willy Caballero once again on the bench.

Defence: Andreas Christensen started for Chelsea against Spurs in midweek but I think we’ll see the Danish international dropping out against Newcastle on Saturday with David Luiz recalled alongside Antonio Rudiger.

Sarri is expected to go with his strongest eleven so he won’t take any chances with his defence meaning his preferred back four should be on show once again. That will see Cesar Azpilicueta keeping his place at right-back ahead of Davide Zappacosta while Marcos Alonso will start ahead of Emerson Palmeiri at left-back.

Midfield: Cesc Fabregas has still not completed his proposed move from Chelsea to Monaco [at the time of writing] but I don’t think the Spaniard will be involved against Newcastle this weekend. Jorginho will keep his place in the deep lying playmaker position.

French international N’Golo Kante is also certain to retain his place in the middle of the park but we could see Sarri making one change in midfield with Mateo Kovacic coming in for Ross Barkley.

Attack: The Chelsea boss went with Eden Hazard in the ‘false 9’ role against Tottenham and the Blues were impressive for long periods despite ultimately losing the game 1-0. The performance may have given Sarri encouragement to stick with the system with Hazard once again leading the line up front.

That would see Olivier Giroud remain on the bench but Alvaro Morata is a doubt with a hamstring injury that ruled him out of the Tottenham game amid reports he could be leaving Stamford Bridge this month.

Callum Hudson-Odoi put in another impressive performance in midweek after starting in attack and the youngster may have done enough to keep his place as Chelsea try to persuade him to snub interest from German to stay at the club.

However, we may see Sarri making one change in attack with Pedro coming in for Willian after the Brazilian international had a frustrating evening at Tottenham on Tuesday night. Ruben Loftus-Cheek is expected to miss out again with a back injury. 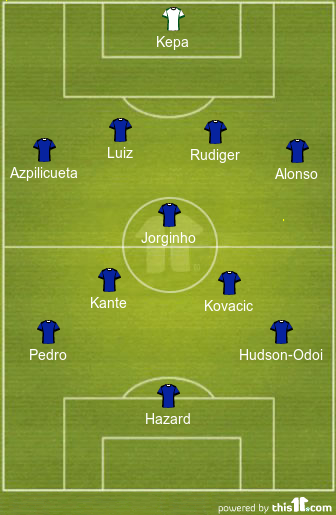