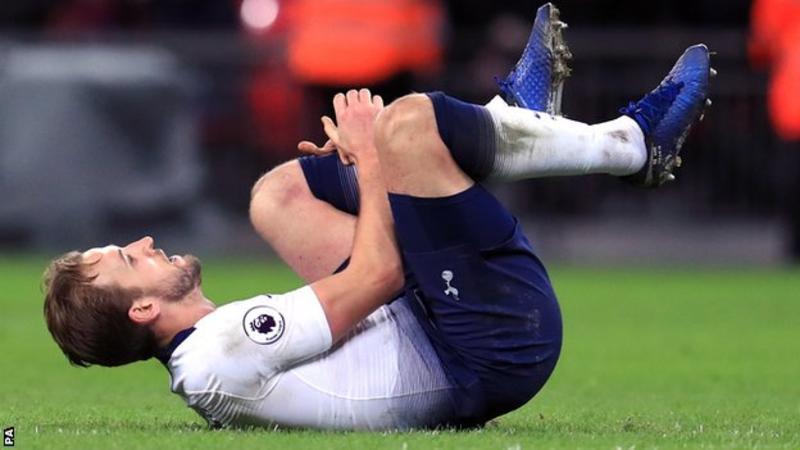 Mauricio Pochettino has admitted it will be a ‘massive’ blow if they lose Harry Kane after he suffered an ankle injury during Tottenham’s 1-0 defeat to Manchester United on Sunday.

Kane once again started up front for Spurs as they looked to climb above Manchester City in to second place in the Premier League table with a win over the in-form United at Wembley yesterday afternoon.

However, the England international endured a frustrating time in front of goal and needed treatment from the Tottenham physio’s after the final whistle after being on the wrong end of a tackle from United defender Victor Lindelof.

Kane hobbled off the pitch looking in clear discomfort after the 1-0 defeat and Pochettino admitted to reporters that he fears losing his star striker at a time when Tottenham could do without losing any more attackers.

Heung-min Son has left to link-up with the South Korean squad at the Asia Cup and Pochettino says it will be a ‘massive’ blow if Kane has now picked up a serious injury problem.

The 25-year-old twisted his ankle following Lindelof’s challenge and Tottenham will have to wait for the swelling to go down before they can investigate further to see what damage has been done.

Kane limping off, doesn’t look good at all #thfc pic.twitter.com/MusNnWS8ja

Pochettino is quoted as saying by the BBC:

“It was a clear foul on Harry Kane, a big hit, [referee] Mike Dean said he didn’t see it. It was a bad tackle and now he has bit of a swelling on his ankle.”

“It wasn’t the intention of the United player but it was a bad tackle and Kane was limping after the game,”

“We are going to lose Son Heung-min for the Asia Cup and if Kane suffers an injury, it is going to be massive for us. He twisted his ankle and we hope that it is not a big issue.”

Tottenham will be praying for positive news as Kane has once again been a key player for the North Londoners having scored 20 goals in his 31 appearances in all competitions this season.

The injury capped a frustrating night for Kane as he failed to find the net having been consistently thwarted by the brilliance of David De Gea in the United goal as the visitors ran out victors thanks to Marcus Rashford’s strike on the stroke of half-time.

De Gea made a number of superb saves throughout the match to keep a clean sheet as United went on to secure a vital 1-0 win – maintaining Ole Gunnar Solskjaer’s perfect start as manager.