Watch the moment Arsenal right-back Hector Bellerin snapped his tendon during the 2-0 victory over Chelsea on Saturday evening. 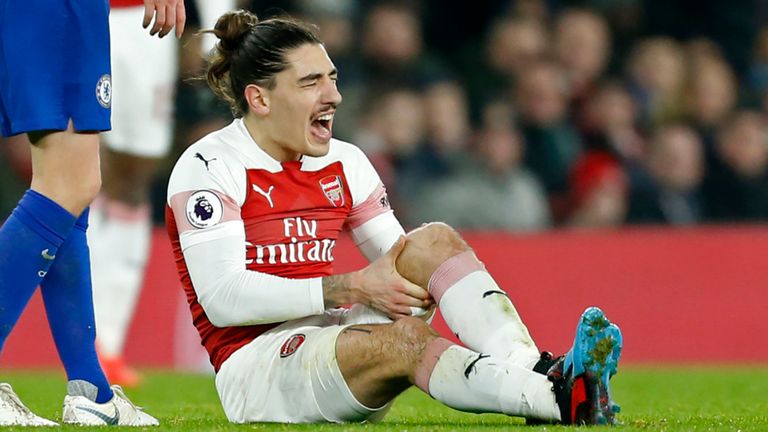 Arsenal right-back Hector Bellerin is facing a lengthy spell on the sidelines after suffering a suspected tendon tear during the 2-0 victory over Chelsea on Saturday evening.

Bellerin has only recently returned from a calf injury that kept him out over the Christmas and New Year period and was back in the starting eleven against Chelsea at the Emirates Stadium yesterday.

The Spaniard was enjoying an excellent game down the right flank as he set-up Alexandre Lacazette for the opening goal before Laurent Koscielny made it 2-0 as Arsenal closed the gap on fourth-placed Chelsea to three points.

However, Bellerin collapsed to the floor holding his knee midway through the second half after an innocuous turn and the defender was visibly upset as he was stretchered off to be replaced by Mohamed Elneny in the 72nd minute.

Unai Emery admitted after the game that the initial signs suggest Bellerin has suffered a serious injury but refused to put a time-frame on his recovery until he’d been further assessed. Emery told Arsenal.com:

on Bellerin’s injury…
We are going to wait until tomorrow. It is his knee and the first prediction maybe can be an important injury. Tomorrow we will speak with the doctor. I hope not, but it is not very positive, our first impression.

A slow-motion video has been circulating on social media showing the moment Bellerin was injured and it appears you can see his tendon snap. Check out the video here:

The video was sent to former NFL head team doctor and practicing orthopedic surgeon David J. Chao and he confirmed Bellerin has suffered a tear to his quad tendon. Dr Chao says the Arsenal star will require surgery and is expected to be out for around 9 months.

He’s quoted as saying by the Express:

“By video, Hector Bellerin @Arsenal tears his left knee quad tendon. Doesn’t appear to be ACL, but still surgery and at least as severe.”

Bellerin is expected to undergo scans to determine the full extent of the injury but if the tendon tear is confirmed by the club, then it will be a devastating blow for Arsenal’s hopes of finishing in the top four this season.

Hector is a hugely important player for us and we’ll struggle to replace him as although Ainsley Maitland-Niles is a fine talent, he’s not on Bellerin’s level and Stephan Lichtsteiner is an accident waiting to happen.

It’s safe to say we’ve had rotten luck with injuries once again as Bellerin will be the third season-ending injury we’ve suffered this season alone with Danny Welbeck out with a broken ankle and Rob Holding recovering from an ACL knee injury.