Chelsea take on Dynamo Kyiv in their Europa League clash at Stamford Bridge on Thursday night. Here is the side I think Maurizio Sarri will select

Chelsea will be looking to secure a healthy lead when they take on Dynamo Kyiv in their Europa League last-16 first leg clash at Stamford Bridge on Thursday night. Here is the side I think Maurizio Sarri will select for the game:

Goalkeeper: Sarri confirmed last week that Kepa Arrizabalaga would start just one of their next two games and after being recalled for the win at Fulham at the weekend, the Spaniard is now expected to make way with Willy Caballero recalled between the sticks.

Defence: The Chelsea boss is also set to make a couple of changes in defence with David Luiz being recalled in the heart of the back four. Andreas Christensen could keep his place so Antonio Rudiger may be given a breather.

Marcos Alonso wasn’t involved against Fulham on Sunday afternoon so he could be recalled at left-back with Emerson Palmeiri making way while Cesar Azpilicueta is likely to continue at right-back ahead of Davide Zappacosta.

Midfield: Sarri has confirmed he’ll rotate his squad to keep legs fresh during a busy period so Mateo Kovacic is expected to be recalled in midfield after being named on the bench at the weekend.

Ruben Loftus-Cheek could also get a run-out with N’Golo Kante and Ross Barkley given a rest but Jorginho may be retained in the deep-lying playmaker role as he’s vital to Sarri’s system and Chelsea don’t really have another player like him who could step-in.

Attack: Chelsea are expected to make plenty of changes to their attack as Sarri looks to keep some key men fresh for Sunday’s Premier League clash with Wolverhampton Wanderers.

Eden Hazard is likely to be given a breather as Chelsea have often protected him in the Europa League this season and they should be confident of beating Dynamo Kyiv at home without their star man.

Gonzalo Higuain was on target again at the weekend but the Argentinean international could be rested tomorrow night with Olivier Giroud given a recall up front having scored against Malmo in the previous round.

Pedro is expected to come back in to the attack after being named on the bench against Fulham so Willian will make way while Callum Hudson-Odoi may also be given another chance to impress in the Europa League. 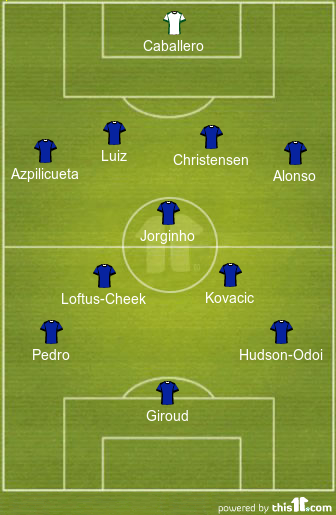