Arsenal are out-performing rivals such as Liverpool, Tottenham and Manchester United with Unai Emery’s side achieving 25% more points compared to the same stage last season.

Emery arrived at the Emirates Stadium last summer to replace long-serving Gunners boss Arsene Wenger and the Spaniard had some huge shoes to fill but he’s enjoyed an impressive debut season in English football.

After a tough start against Man City and Chelsea, Emery led Arsenal on a 22-game unbeaten run in all competitions and while they suffered a dip over the festive period, the north Londoners have returned to form in recent weeks.

After securing wins over Huddersfield, Southampton and Bournemouth last month, Arsenal were unfortunate to only draw at rivals Tottenham last weekend before beating Manchester United 2-0 at the Emirates on Sunday.

That victory has seen the Gunners climb into the top four – two points ahead of United and only one point adrift of Tottenham – and with a favourable run-in, Arsenal are well-placed to return to the Champions League next season after finishing sixth last year.

A return of 60 points from 30 league games so far is an excellent record for Emery and it puts Arsenal 12 points better off compared to the same stage under Wenger last season – which equates to a 25% rise. That’s the second best increase in the entire division – second only to West Ham’s 30% increase – and trumps all of Arsenal’s ‘top six’ rivals. 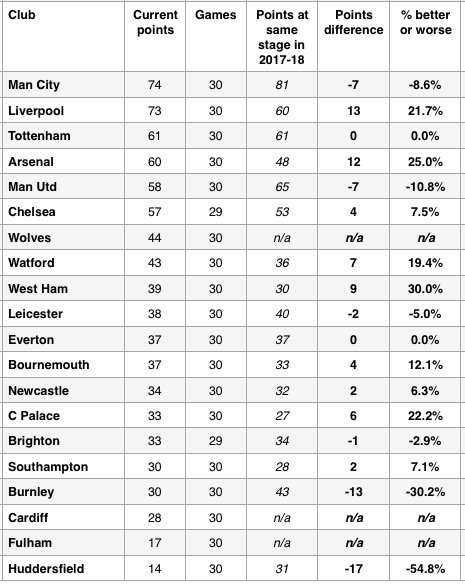 Tottenham have seen their title challenge collapse after taking just one point from the last 12 available to leave them on 61 points, which is exactly the same number they had at this stage last season.

Manchester United have rediscovered their form under Ole Gunnar Solskjaer following a disastrous first half to the season but they are still 7 points worse off compared to last season under Jose Mourinho – which is a 10.8% decrease year-on-year.

Arsenal are even out-performing Liverpool, with Jurgen Klopp’s title challengers 21.7% better off compared to last season having picked up 13 points more than at this stage last campaign.

Manchester City ran away with the Premier League title last season but Pep Guardiola’s side haven’t quiet been as consistent this year so they are 7 points worse off, which is a decrease of 8.6%.

Chelsea have made improvements under Maurizio Sarri this season as the west Londoners are four points better off year-on-year, an increase of 7.5%, but that doesn’t compare with the improvements made by Arsenal.

Unsurprisingly, the biggest losers are bottom club Huddersfield Town as they have a staggering 54.8% less points compared with this stage last season – when they did superbly well to avoid relegation.