Arsenal take on Rennes in our Europa League last-16 second leg on Thursday night. Here is the side we think Unai Emery will select for the game:

Arsenal will be looking to turn around a 3-1 deficit when we take on Rennes in our Europa League last-16 second leg at the Emirates Stadium on Thursday night. Here is the side Gooner Mac thinks Unai Emery will select for the game:

Goalkeeper: Bernd Leno was outstanding during our 2-0 victory over Manchester United at the weekend but Emery has stuck with Petr Cech throughout the Europa League campaign so I expect the Czech legend to be recalled tomorrow.

Defence: Arsenal went with a back three against United on Sunday but with Sokratis suspended following his sending off in the first leg last week, I think we might see Emery switching to a back four. Shkodran Mustafi could therefore be recalled to line-up alongside Laurent Koscielny in the middle of defence after being dropped against United.

Ainsley Maitland-Niles did well in the right wing-back position at the weekend so he could be retained while Nacho Monreal may be preferred to Sead Kolasinac at left-back despite the Bosnian international being a real attacking force for us down the wing.

Midfield: Lucas Torreira was suspended against United so he’ll be fresh and I think Emery will recall him to start in midfield. Granit Xhaka is also expected to keep his place so Aaron Ramsey may miss out despite producing another excellent display at the weekend in a deeper role.

Matteo Guendouzi has been given some rest lately and I don’t think the French youngster will start against Rennes so a place on the bench is likely for the 19-year-old tomorrow.

Attack: Alexandre Lacazette has been cleared to face Rennes after UEFA reduced his suspension to two matches. The striker was initially banned for three-games following his dismissal during Arsenal’s last-32 first leg defeat at BATE Borisov but Laca is now free to be involved tomorrow.

The French hitman has been excellent recently and was one of our best players against United, however, the expected formation change means Emery will only have room for one striker and he’s hinted he’d like to have attacking options on the bench if he needs to change the game. Therefore, I wouldn’t be surprised to see Lacazette named on the bench with Pierre-Emerick Aubameyang selected to lead the line up front.

Henrikh Mkhitaryan looks set to return after missing Arsenal’s win over United with a minor back injury and I think he’ll be recalled as he’s been in superb form recently having been named as our Player of the Month for February.

Mesut Ozil has certainly made a difference since being introduced back into the team in recent weeks and I think the German playmaker will keep his place as we need to score at least two goals in order to qualify for the quarter-finals.

The final place in attack could go to Alex Iwobi with the Nigerian recalled to start on the left wing meaning Denis Suarez will once again have to make-do with a place on the bench. 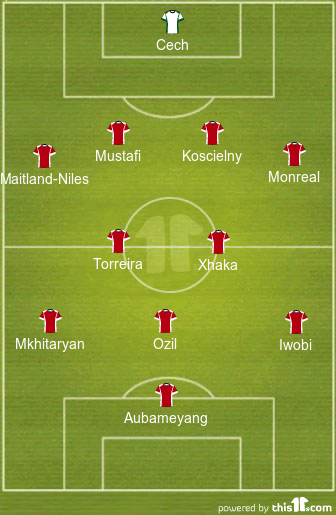