Chelsea will be looking to close-in on the top four with a win over Cardiff on Sunday. Here is the side I think Maurizio Sarri will select

Chelsea will be looking to close-in on the top four with a win over Cardiff City on Sunday afternoon. Here is the side I think Maurizio Sarri will select for the game:

Goalkeeper: I don’t think there is too much doubt over who will start in goal as Kepa Arrizabalaga is expected to keep his place with Willy Caballero once again named among the substitutes.

Defence: The Chelsea defence was poor during the 2-0 defeat to Everton before the international break so Sarri will be expecting an improved performance at the back tomorrow. However, I don’t think we’ll see too many changes in personnel.

Andreas Christensen is pushing for a recall but I think we’ll see Antonio Rudiger continue alongside David Luiz in the middle of defence with Cesar Azpilicueta certain to remain at right-back as Davide Zappacosta struggling with an ankle injury.  The one change we could see Sarri make is Emerson Palmeiri coming in for Marcos Alonso at left-back.

Midfield: Chelsea will hand a late fitness test to Ruben Loftus-Cheek as the midfielder is struggling with a back injury but the youngster will probably have to settle for a place on the bench even if he’s passed fit.

Jorginho is certain to keep his place in the deep-lying playmaker role while N’Golo Kante is also sure of his place in Sarri’s starting eleven so there is one midfield place up for grabs. Ross Barkley has been seeing plenty of game-time lately but I think we could see Mateo Kovacic given a recall against Cardiff tomorrow.

Attack: Chelsea were disappointing in attack at Goodison Park last time out so Sarri will be demanding better from his forwards on Sunday. Eden Hazard is certain to keep his place but the Belgian international will be looking to get back on the score-sheet having found the target just once in his last five league games.

Gonzalo Higuain has also scored just once in his last five Premier League outings so the South American hitman will be keen to register against Cardiff if he’s selected to lead the line up front ahead of Olivier Giroud.

Sarri has hinted Callum Hudson-Odoi will be given more regular starts over the coming weeks but I still think the youngster will have to settle for a place on the bench tomorrow afternoon. Willian is also competing for a place in attack but I think Pedro will keep his place alongside Hazard and Higuiain. 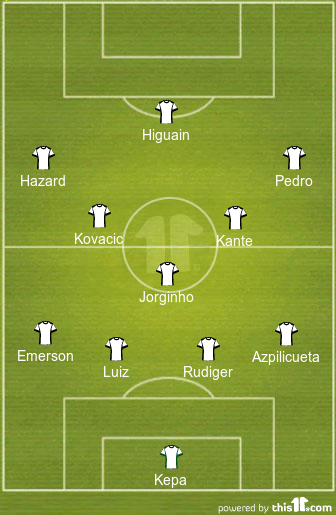