Arsenal take on Newcastle United at the Emirates Stadium on Monday night. Here is the side Gooner Mac thinks Unai Emery will select for the game:

Arsenal will be looking to go third in the table with a win over Newcastle United at the Emirates Stadium on Monday night. Here is the side Gooner Mac thinks Unai Emery will select for the game:

Goalkeeper: Petr Cech kept goal for our Europa League win over Rennes before the international break but he’s expected to make way with Bernd Leno recalled between the sticks.

Defence: Arsenal have deployed a back three in the last few games to good effect so I think Emery will stick with that system against Newcastle. Laurent Koscielny should keep his place while Nacho Monreal is expected to be fit to start after recovering from a calf injury that kept him out of our warm weather training camp in Dubai.

Sokratis is back in contention after missing the Rennes game through suspension and I expect the Greek international to replace Shkodran Mustafi in the back three. Rob Holding is obviously still out with a long term knee injury.

Lucas Torreira is still suspended as he’ll serve the final game of his three-match ban while Aaron Ramsey is a doubt with a knock that kept him out of international duty with Wales. He’ll be given a late fitness test but I don’t think Emery will risk him from the start so Matteo Guendouzi could start.

Granit Xhaka is facing a late fitness test after suffering a groin injury while away with Switzerland during the international break. Emery will give the midfielder every chance to prove his fitness.

Attack: Mesut Ozil has been back in the line-up recently and performed well against Manchester United and Rennes before the break so I hope the German playmaker retains his place in the attacking midfield position.

Ozil is likely to be retained if Arsenal go with both Pierre-Emerick Aubameyang and Alexandre Lacazette up front – as has been the case in recent games. It’s difficult to leave either player out so I expect us to go with both our star strikers against Newcastle.

However, if Emery decides to mix things up then he has plenty of options as Henrikh Mkhitaryan and Alex Iwobi both impressed off the bench against Rennes and they’re pushing for recalls to the starting eleven.

Denis Suarez is also in contention and Emery has hinted the Spaniard is now ready to make a real impact having struggled to settle following his loan move to Arsenal from Barcelona in January. 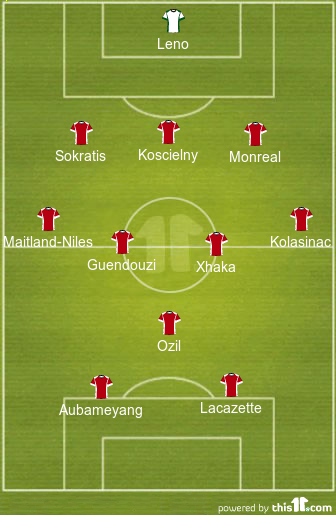