Arsenal take on Napoli in the second leg of our Europa League quarter-final tie this evening. Here is the side we think Unai Emery will select:

Arsenal take on Napoli in the second leg of our Europa League quarter-final tie at the Stadio San Paolo this evening. Here is the side Gooner Mac thinks Unai Emery will select for the game:

Goalkeeper: Petr Cech kept goal for the first leg win last week and I fully expect him to be recalled tonight. It may be a risk given Bernd Leno is clearly the better goalkeeper and is in fine form but Emery has stuck with Cech in Europe this season.

Defence: Arsenal started with a back four during the 1-0 win over Watford at Vicarage Road on Monday night but I expect Emery to switch to a back three with wing-backs against Napoli this evening.

Laurent Koscielny should once again captain the side in the middle of defence while Nacho Monreal should move back into the left side of the back three. Sokratis is expected to be recalled after missing the Watford game through suspension meaning Shkodran Mustafi will be the man to make way.

Midfield: Lucas Torreira was forced off at half-time during Arsenal’s win over the Hornets after aggravating a groin problem. The Uruguayan international has made the trip to Italy but Emery may not risk him from the start if he’s not 100% fit.

Granit Xhaka made a successful return to action on Monday after recovering from his own groin complaint that had kept him out for three games and the Swiss international should keep his place in the middle of the park tonight.

Aaron Ramsey has been in fine form lately after Emery finally trusted him in a deeper midfield position so we could see the Welshman alongside Xhaka if Torreira isn’t risked. Matteo Guendouzi is another option for the Arsenal boss while Mohamed Elneny is also available but I think they’ll have to settle for places on the bench against Napoli.

Sead Kolasinac and Ainsley Maitland-Niles were both rested against Watford last time out so with the change in formation to a 3-4-2-1 the duo should be recalled in the wing-back positions.

Attack: Alexandre Lacazette didn’t feature at Vicarage Road after being rested so he’ll be fresh to return up front against Napoli. The Frenchman has been playing well lately so hopefully we see another impressive performance from Lacazette tonight.

Pierre-Emerick Aubameyang scored the winner on Monday night but I wouldn’t be surprised to see him drop to the bench as Emery is unlikely to deploy two strikers away from home with Arsenal trying to protect a 2-0 lead. Therefore, I think we’ll see Auba used as an impact substitute.

Mesut Ozil was rested for the win at Watford and he was excellent in the first leg win over Napoli last week so we should see the German playmaker recalled to the starting eleven tonight.

Henrikh Mkhitaryan has a stinker against the Hornets so we should see him dropping to the bench while Alex Iwobi should keep his place in the Arsenal attack. Denis Suarez has been ruled out with a niggling groin injury. 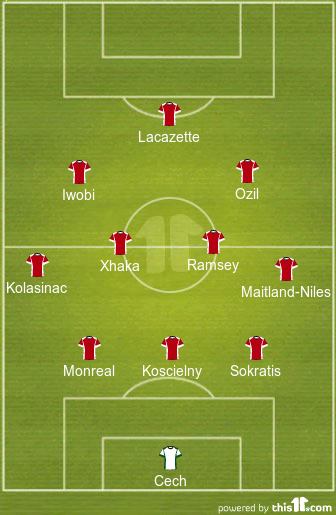