Arsenal have booked their place in the semi-finals of the Europa League thanks to a 3-0 aggregate victory over Napoli. Watch the goal here. 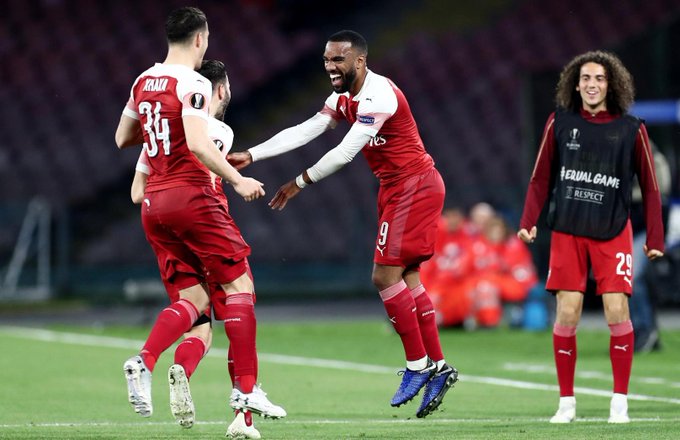 Arsenal have booked their place in the semi-finals of the Europa League thanks to a 3-0 aggregate victory over Napoli following a 1-0 win in Italy tonight.

Napoli wasted a couple of great opportunities inside the opening 30 minutes with Petr Cech saving well from Jose Callejon while Arkadiusz Milik headed wide when well placed in the area.

The hosts were made to pay for their sloppy finishing as Arsenal grabbed a vital away goal when Alexandre Lacazette fired home a superb free-kick from 25 yards to make it 0-1 in the 36th minute. It meant we lead 3-0 on aggregate leaving Napoli needing to score four goals to progress.

Pierre-Emerick Aubameyang missed a golden chance to put the tie beyond any doubt early in the second half as he was left free in the area just yards from goal but his goal bound effort was tipped over by a stunning save from Meret.

Napoli struggled to create anything of note as they tried to get themselves back in the game so Arsenal eased to an impressive 1-0 win at the Stadio San Paolo this evening.

It completed an excellent 3-0 aggregate win which sets-up a semi-final with Valencia after they beat Villarreal 5-1.