Managers are working hard trying to strengthen their squads during the summer transfer window so we’ll bring you all the latest news and gossip from around the globe. Here, Arsenal and Tottenham are linked with Malcom… 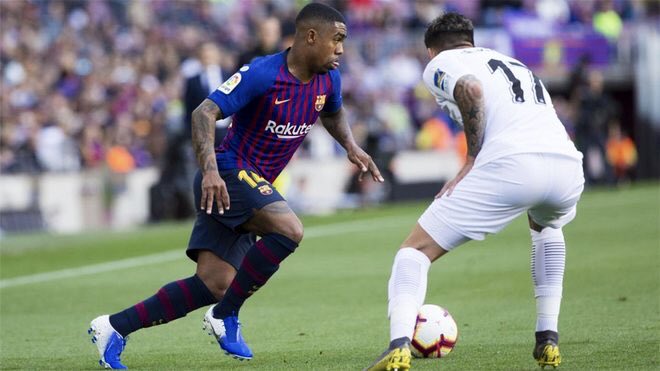 Arsenal and Tottenham are in a battle with Everton over a deal to sign Malcom as Barcelona look to cash in on the £36m winger, according to Spanish journalist Kike Marin.

Malcom has struggled to establish himself as a first team regular since joining Barcelona from Bordeaux 12 months ago with the Brazilian attacker only managing 6 starts in La Liga and Champions League matches last season.

It’s led to speculation the 22-year-old will be sacrificed as Barca look to fund big-money moves for Neymar and Antoine Griezmann this summer and Malcom has been linked with a move to the Premier League in recent weeks.

Spanish journalist Kike Marin – who works for El Confidencial – has now claimed Arsenal, Tottenham and Everton have all expressed their interest with Barcelona valuing the South American at £36m [€40m].

Mauricio Pochettino has already signed Jack Clarke and Tanguy Ndombele but the Tottenham boss is in the market for further reinforcements and it seems he’s identified Malcom as a possible signing.

However, it seems Arsenal are hoping to trump their north London rivals as Marin says the Gunners are hoping to sign Malcom on an initial loan deal with an option to make the move permanent next summer.

#FCBarcelona has priced €40 million for Malcom, for which they have interest from #Arsenal, #Tottenham and #Everton that offers about €35m. The Gunners want a loan with an option to buy. Raül Sanllehí has ​​it difficult, but the key will be what the player wants.

Unai Emery is desperately trying to strengthen his squad ahead of the new season after finishing fifth last campaign and a new wide forward is on the agenda after Danny Welbeck left the club following the expiration of his contract.

It looks like Arsenal are keen to lure Malcom to the Emirates having missed out on his signature last summer but with Everton also showing a keen interest along with Tottenham, it’s going to be an interesting transfer battle between the three English clubs.

We’ll have to wait and see how things develop but I think Malcom would be an excellent signing for Arsenal, Tottenham or Everton as he hasn’t been able to fulfill his true potential at the Nou Camp and I feel he’d thrive if given a more prominent role at another club.