14.02.11 Big Ronaldo called it a day on a decorated career made up of goals, titles and fancy cake icing, and is now preparing a ‘knees up’ in celebration of no longer having to get his knees up. (I bet your thinking) One of football’s finest strikers retires and all TWR does is make endless weight analogies, so accept my sincere apologies with a tribute to the Brazilian http://www.youtube.com/watch?v=OprQEC3eAl8 (joking, joking)  http://www.youtube.com/watch?v=MMXhvVBxut4&feature=related Here’s a fan made tribute to the front man, titled ‘Ronaldo the best soccer player in the world’ (so that should provide some balance – unlike somebody’s diet) someone please just shoot me!

14.02.11 David Luiz not only posses the red fiery curls of Carlos Puyol it appears he also shares his talent as well.  So the poll this week is whether or not Luiz can one day emulate the Spanish Centre half (hair wise of course) (Leave your votes below)

16.02.11 Jack Wilshere announced himself to the world, Barcelona and most importantly Mario Balotelli (as he would have you believe) after his Champions League performance on Wednesday. What he also worryingly did was place himself on Barcalona’s radar (aka Juan La Porta mouth), even though they have as much chance of signing him, as Mario Balotelli does of using his ‘count to ten’ technique.

17.02.11Raheem Sterling was the name on everyone’s lips at Anfield this week and looks a real prospect. All he needs to do now is make sure that he doen’t allow the mother of all sterlings to get to his head (not his mummy, the great British currency)

18.02.11 Ryan Giggs’s year contract extension is an example to all footballers on how maintaining a healthy lifestyle can lead to career of longevity… maybe Big Ron should have taken notes (seriously, that gun please I’ll do it myself)

20.02.11The magic of the FA Cup or classic Manuel Almunia?… (The question’s a rhetorical one by the way, Manuel Almunia’s inability to get the goalkeeping basics right, kind of makes it hard for him to be a keeper)

The press went ultra patriotic this week in defending Joe Jordan’s honour, and as we do when going into that mode we lose all sense of reality and suddenly start believing the craziest of theories, ‘we can win the world cup’ ‘Andy Murray can win Wimbledon’ and now Joe Jordan’s capable of beating the Italian bulldog Genero  Gattuso. Well ‘The Weekly Strip’ intends to restore reality with ‘The top five reasons why Jordan wouldn’t stand a chance’ 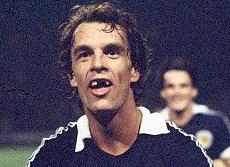 The insurance policy he’s taken out on his teeth doesn’t cover him getting them knocked out via a physical altercation, so Jordon’s already at a disadvantage as he’ll be forced to keep his hands up in protection instead of throwing them (which you kind of need to do in a fight) Gattuso already proved that he’s fearless and anyone getting Lippi sets him right off, regardless of who it is.

The consequences of defeat may also mean being stripped of his modelling contracts, where he’s used as the poster boy for hard (definitely no pun intended) and sexy at the same time.