We’re now at the business end of the summer transfer window and managers are working hard trying to strengthen their squads so we’ll bring you all the latest news and gossip from around the world. Here, Real Madrid enter the chase for Bruno Fernandes…

Manchester United and Tottenham will face a battle with Real Madrid to sign £63m-rated Sporting Lisbon midfielder Bruno Fernandes this summer, according to reports in Portugal via TeamTalk.

Fernandes has been one of the hottest players of the summer transfer window as he’s attracted interest from a whole host of clubs following a stunning campaign that saw him score 32 goals and provide a further 18 assists for Sporting last season.

The 24-year-old looked to be heading to Old Trafford with Marca reporting recently that Fernandes was set for a move to Manchester United following a breakthrough in negotiations with Sporting Lisbon.

Ole Gunnar Solskjaer is in the market for a creative midfielder and the Portuguese international is reportedly a prime target but the proposed move was put on hold while United focussed their attention on signing Harry Maguire.

That delay opened the door for Tottenham with O Jogo claiming last week that Spurs chiefs had flown to Portugal to hold face-to-face talks with Sporting president Frederico Varandas to discuss a deal for Fernandes. 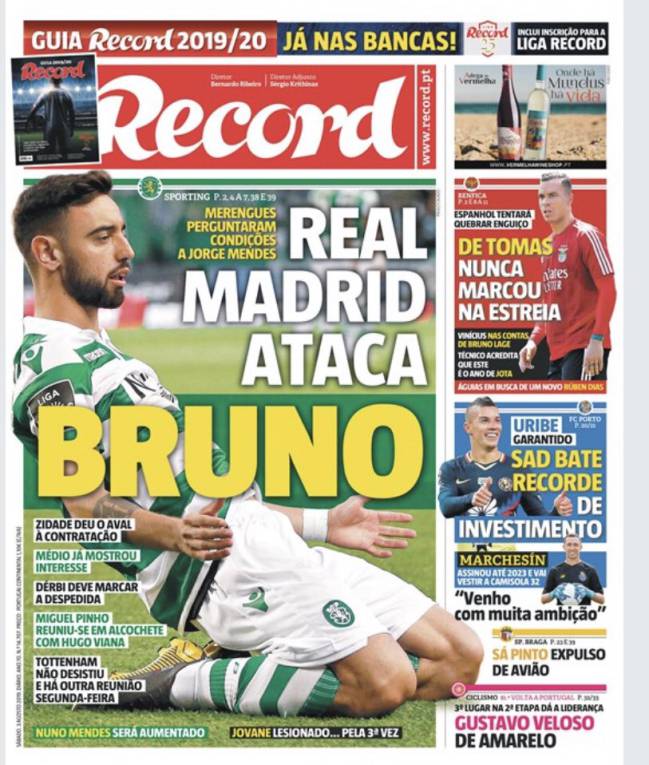 The Daily Mail claimed yesterday that the attacking midfielder has pleaded with Sporting to let him join Tottenham but TeamTalk says the north Londoners are struggling to agree a fee after refusing to meet the players £63m asking price.

United and Spurs are expected to push for Fernandes during the closing stages of the window but it looks like they’ll face fresh competition as TeamTalk are citing a report from the newspaper version of Record that claims Real Madrid have now made a late play to nab him.

The Portuguese publication says Madrid have instructed super-agent Jorge Mendes to mediate negotiations on their behalf after boss Zinedine Zidane gave the go-ahead to pursuing a deal for Fernandes.

We’ll have to wait and see how things develop over the coming days but with the English transfer window closing on Thursday night, United and Spurs are running out of time to get a deal agreed for Fernandes before the window slams shut.

Madrid have the advantage that they have until the end of the month to agree terms with Sporting so if the Premier League giants fail to get a deal over the line, then Madrid will be in pole position to sign the sought-after midfielder.