This is a match preview ahead of Liverpool’s Premier League clash with Southampton including team news, line-ups and predicted score

Liverpool will look to make it two wins from two Premier League games when they take on Southampton at St Mary’s on Saturday afternoon.

The European Champions made light work of newly-promoted Norwich City last Friday night as they eased to a 4-1 victory at Anfield so Jurgen Klopp will be desperate to build on that result with another win tomorrow.

Liverpool secured more silverware in midweek as they beat Chelsea on penalties following a 2-2 draw in the Super Cup in Istanbul but Klopp will be hoping that trip hasn’t taken too much out of his squad.

Southampton on the other hand endured a tough start to the new season as they slumped to 3-0 defeat at Burnley last weekend so boss Ralph Hasenhüttl will be hoping to bounce back with a positive result tomorrow.

Liverpool were dealt a huge injury concern after Adrian picked up an ankle problem during a freak accident on Wednesday night. The goalkeeper sustained the injury after a pitch invader slipped and kicked his ankle while the team celebrated their victory over Chelsea.

Klopp says the Spaniard will be assessed before a decision is made over his availability but Adrian has since said he’s confident he’ll be fit so it looks like he’ll keep his place with Alisson Becker still nursing a calf problem.

Naby Keita is also certain to miss out for Liverpool as the midfielder is still working his way back from a hip injury that he sustained before the Super Cup on Wednesday night.

Southampton have no fresh injury concerns so Hasenhüttl has a fully-fit squad to choose from and winger Moussa Djenepo is pushing to make his full debut after coming off the bench last weekend. 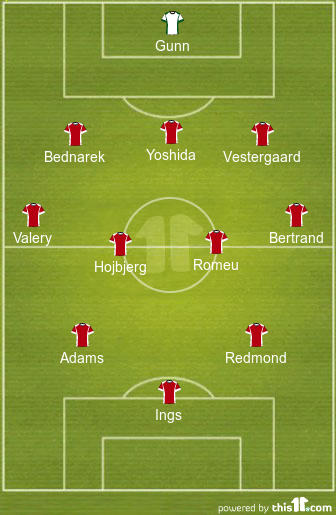 Southampton 0-2 Liverpool: The Reds have lost just one of their last 11 meetings with Southampton and have won each of the last four Premier League games so they should be confident of bring home all three points tomorrow. The Saints will be hurting from their defeat to Burnley and should be desperate to register a positive result but Liverpool should have far too much quality. Therefore, I’m predicting a routine 2-0 victory for the Merseysiders on the south coast.