This is a match preview ahead of Liverpool’s Premier League clash with Arsenal including team news, line-ups and predicted score

Liverpool currently sit top of the table on goal difference after following-up their 4-1 victory over Norwich City on the opening weekend of the season with a hard fought 2-1 win at Southampton last time out.

Jurgen Klopp’s side are yet to hit top gear but they’ve still managed to put six points on the board so that will bode well for the European champions as they look to go one better than last year by clinching the Premier League title this season.

Arsenal are the only other team to have won both of their opening matches with Unai Emery’s side beating Newcastle 1-0 before seeing off Burnley 2-1 at the Emirates last weekend to take maximum points from their two opening games for the first time in 10 years.

At least one of the 100 percent records must go this weekend and Emery knows Arsenal will face a huge task against Liverpool as the north Londoners record at Anfield in recent years has been woeful.

Liverpool have no fresh injury concerns to worry about but Alisson Becker remains on the sidelines with a calf injury so Adrian is expected to continue in goal despite his error against Southampton last weekend.

New customers only, bet up to £/€20 on the Exchange and if your first bet loses, we’ll refund you £/€20 in Cash. Bet must be placed in first 7 days of account opening. T&Cs apply.

Naby Keita is also still out for Liverpool with a muscle strain but Jordan Henderson and Fabinho are pushing for recalls after being named on the bench at St Mary’s.

Arsenal will make late calls on Granit Xhaka and Mesut Ozil after the pair returned to full training this week having missed the win over Burnley but both players are expected to be in the squad tomorrow.

Rob Holding will continue his recovery from a knee injury with a run out for the U23s tonight but he’s still unavailable for first team duty along with the likes of Hector Bellerin, Kieran Tierney and Dinos Mavropanos.

Summer signing Nicolas Pepe is expected to make his full debut for Arsenal so Reiss Nelson may drop to the bench. 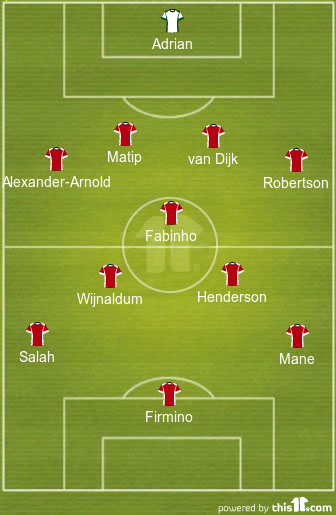 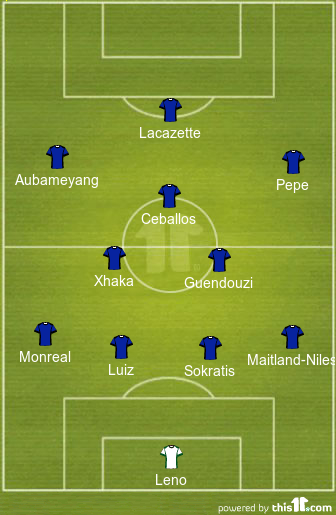 Liverpool 3-1 Arsenal: The Gunners strengthened well this summer and there is renewed optimism around the club but this is still going to be a huge test for the Londoners. Liverpool are unbeaten in their last eight matches against Arsenal and the Gunners haven’t won at Anfield in their last six visits.  Klopp’s side haven’t tasted defeat at home in the league in 41 games and Arsenal’s record away record has been dire in the past few years, especially against the big clubs.

The Liverpool front three all have excellent goal-scoring records against Arsenal as well so it’s difficult to see past a home victory tomorrow. I do think Arsenal may compete more than they have done in the past two seasons, but ultimately Liverpool will be too strong.