Tottenham take on Arsenal at the Emirates on Sunday afternoon. Here is the side we think Mauricio Pochettino will select for the game:

Tottenham will be looking to get back to winning ways when they take on Arsenal at the Emirates on Sunday afternoon. Here is the side we think Mauricio Pochettino will select for the game:

Goalkeeper: I don’t think we should spend too long debating over who’ll start in goal as Hugo Lloris is certain to retain the gloves on Sunday with Pablo Gazzaniga on the bench once again.

Defence: Jan Vertonghen is yet to start a game so far this season so he’ll be pushing for a recall but Pochettino seems to be favouring Davinson Sanchez right now so I think we’ll see the Colombian international continuing alongside Toby Alderweireld at the Emirates.

Danny Rose appears to have established himself ahead of Ben Davies at left-back so he should retain his place but Tottenham are facing a growing crisis at right-back after Kyle Walker-Peters was ruled out with a hamstring injury that forced him off during the defeat to Newcastle last weekend.

Eric Dier is also a major doubt due to a hip complaint and he’s facing a late fitness test so with Juan Foyth still recovering from an ankle injury, Pochettino has to find a solution against Arsenal.

Moussa Sissoko could be moved to right-back but I don’t think Poch will want to lose him from midfield so the Tottenham boss may be forced to recall Serge Aurier. The Ivory Coast international has been strongly tipped to leave before the European window closes but Spurs may have little choice but to give him his first taste of first team action since February.

Midfield: Tottenham’s record signing Tanguy Ndombele has been ruled out of the trip to Arsenal after failing to recover from a hamstring injury that kept him out of the game against Newcastle United.

Dier is a doubt and Victor Wanyama has left for Club Brugge so Harry Winks should keep his place in midfield alongside Sissoko with Oliver Skipp named on the bench.

Attack: The big decision for Pochettino is whether to recall Christian Eriksen after naming him on the bench for Tottenham’s opening three matches. The Dane has impressed every time he’s come on and I think Poch might feel this is the ideal game to unleash Eriksen from the start, especially with Giovani Lo Celso still not fit enough to play the full ninety minutes.

Harry Kane will be looking to continue his superb goal-scoring record against Arsenal as he’ll lead the line up front while I expect Hueng-min Son to retain his place in the Spurs attack despite a below par display against Newcastle.

Dele Alli has built-up his fitness in training this week after recovering from injury but he’s unlikely to be thrown in from the start so a place on the bench is likely for the attacking midfielder.

Erik Lamela started during the defeat to Newcastle but I think he’ll make way if Eriksen is recalled meaning Lucas Moura should keep his place alongside Kane and Son in the Tottenham attack. 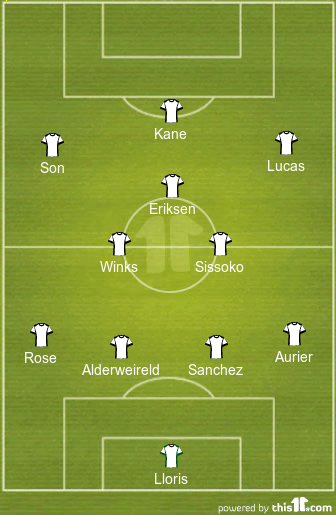