Arsenal take on Watford at Vicarage Road on Sunday afternoon. Here is the side Gooner Mac thinks Unai Emery will select for the game:

Arsenal will look to get back to winning ways when they take on Watford at Vicarage Road on Sunday afternoon. Here is the side Gooner Mac thinks Unai Emery will select for the game:

Goalkeeper: Emi Martinez has set his sights on the No.1 shirt but I think it’s safe to say Bernd Leno is Emery’s first choice right now so I expect the German international to retain his place on Sunday.

Defence: Hector Bellerin and Kieran Tierney are back in full training but Emery has confirmed they will be given plenty of time to build up their match fitness before they’ll be involved in the first team. Therefore, Ainsley Maitland-Niles and Sead Kolasinac should keep their places in the full-back positions against Watford.

Rob Holding is close to making his comeback from a serious knee injury but Emery has suggested he won’t be involved this weekend so he may be saved for the Europa League trip to Frankfurt on Thursday. David Luiz kept his place against Tottenham following his nightmare at Liverpool so the Brazilian international should once again start alongside Sokratis.

Midfield: Granit Xhaka showed once again why he shouldn’t be a regular for Arsenal with another brainless ‘challenge’ in the area which gave away a crucial penalty during the draw with Tottenham. However, he’s clearly a favourite of Emery’s and is expected to keep his place after recovering from an Achilles problem that forced him off while playing for Switzerland.

Lucas Torreira is also fit despite picking up a knock while away with Uruguay while Joe Willock is expected to be in the squad despite withdrawing from the England U21 squad with a calf problem.

However, Torreira and Willock may have to settle for places on the bench this weekend as Matteo Guendouzi should keep his place alongside Xhaka as the Frenchman has been excellent all season. Dani Ceballos could be given a recall in place of Torreira after making another impressive appearance off the bench last time out.

Attack: Arsenal have been dealt a major blow as Alexandre Lacazette has been ruled out for ‘several weeks’ with a niggling ankle injury that’s hampered him all season. Pierre-Emerick Aubameyang will lead the line up front and the Gabon hitman will be under pressure to supply the goals in Lacazette’s absence.

Nicolas Pepe showed glimpses of his obvious quality against Tottenham and he should keep his place in the Arsenal attack but it will be interesting to see how joins him with Lacazette out.

Mesut Ozil could be recalled to play in a wide position or maybe Emery will go with Ceballos or Willock from the wing but I think the obvious answer is to recall Reiss Nelson and give him a run in the team. 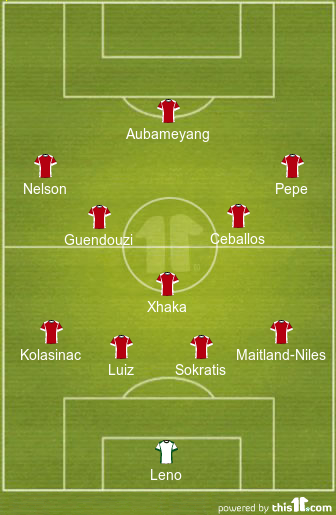