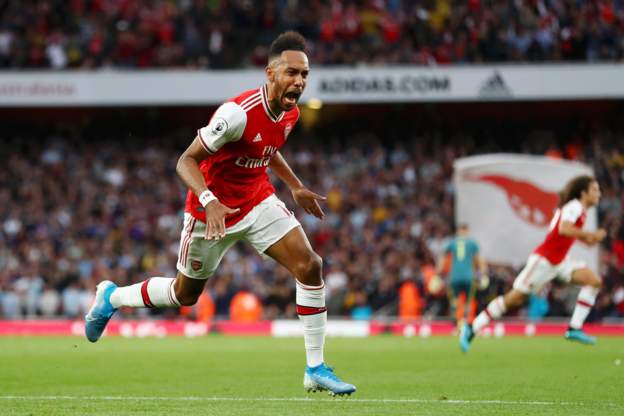 Pierre-Emerick Aubameyang scored a superb late free-kick to complete a stunning comeback as 10-man Arsenal beat Aston Villa 3-2 at the Emirates this afternoon.

Ainsley Maitland-Niles missed a great chance to open the scoring early on when he blazed high over the bar and it turned out to be a vital miss as Villa were soon leading in north London.

Anwar El Ghazi was allowed to curl a wonderful delivery into the Arsenal box under no pressure from Maitland-Niles and John McGinn ghosted into the area to flick past Bernd Leno for 0-1 to Villa in the 20th minute.

A bad day for Maitland-Niles got even worse when the Arsenal player was sent off for a second booking following a poor challenge in the 41st minute. There didn’t appear to be much contact but his lunge was reckless.

Despite being a man down Arsenal grabbed an equaliser in the 59th minute when Nicolas Pepe opened his account for the club with a penalty after Matteo Guendouzi was brought down in the area.

However, the celebrations didn’t last long as Villa went straight up the other end to restore their lead when Wesley poked home at the near post following good work from Jack Grealish – although David Luiz shouldn’t certainly have done better to prevent the goal.

Arsenal pushed to find another equaliser and eventually found a way through in the 81st minute when Calum Chambers did superbly well to find the back of the net from close range to make it 2-2.

We completed a stunning turnaround when Pierre-Emerick Aubameyang fired home a wonderful free-kick in the 94th minute to make it 3-2 to 10-man Arsenal and secure a vital three points which takes us fourth in the table.