Manchester United take on Arsenal at Old Trafford on Monday night. Here is the team we think Ole Gunnar Solskjaer will select for the game:

Manchester United will be looking to get back to winning ways when they take on Arsenal at Old Trafford on Monday night. Here is the team we think Ole Gunnar Solskjaer will select for the game:

Goalkeeper: Sergio Romero was back in goal for the 1-1 draw with Rochdale in the Carabao Cup last week but David De Gea will be recalled against Arsenal tomorrow night.

Defence: Solskjaer is sure to make changes to his defence as Harry Maguire and Victor Lindelof will be recalled after being rested on Wednesday night. Phil Jones picked up a knock against Rochdale and has been ruled out of this game while Axel Tuanzebe is expected to drop to the bench.

Aaron Wan-Bissaka could be the only defender to keep his place after starting in the League Cup last time out. Luke Shaw could be back in contention after recovering from a hamstring injury but he may be lacking match fitness so Ashley Young may start at left-back against Arsenal.

Midfield: Man Utd are set to be without Paul Pogba after he aggravated an ankle injury in the Carabao Cup. The Frenchman made his comeback against Rochdale having missed the previous three games but Solskjaer says the midfielder’s ankle was sore and swollen after the match so Pogba is expected to miss out on Monday night.

Scott McTominay has become a key player under Solskjaer so he’ll be recalled against Arsenal while Nemanja Matic could line-up alongside the Scottish international in the middle of the park. Fred failed to take his chance to impress during Man Utd’s League Cup clash so Solskjaer may opt with Matic alongside McTominay.

Attack: Manchester United have limited options up front as Marcus Rashford is set to remain on the sidelines with a groin injury that’s hampered him recently while Anthony Martial is also expected to miss out with an on-going thigh injury.

Therefore, Solskjaer may have little choice other than to hand Mason Greenwood a start in the Premier League and the teenager should be full of confidence having scored twice in his last two appearances.

Daniel James should come back into the Man Utd attack tomorrow night after being a sub against Rochdale while Juan Mata may also get a recall having been named on the bench last week.

Andreas Pereira is an option for the final place in the United attack but I wouldn’t be surprised to see Jesse Lingard getting the nod against Arsenal instead. 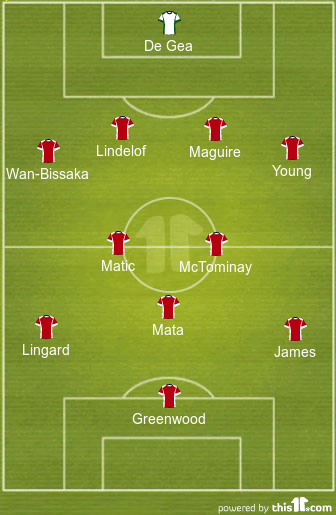