Ahead of tonight’s huge Premier League clash between Arsenal and Man Utd, here is a combined eleven assuming everybody is fit.

Manchester United and Arsenal face-off at Old Trafford this evening. Both clubs are in a period of transition and this game will be a long way from the title showdowns we’ve seen in the past. However, it should still be an enthralling match between two English giants so I thought I’d put together a combined eleven. I won’t be choosing between Henry and Van Nistelrooy or Vieira and Keane, but there are still some interesting match-ups to deliberate over. Assuming everybody is fit, this would be my team….

David De Gea’s form has slipped over the past 12-18 months but he’s still one of the best goalkeepers in the world. Bernd Leno has steadily improved since joining Arsenal 15 months ago and he’s now established himself as their No.1 but I don’t think many can argue De Gea should get the nod.

Harry Maguire has settled into life at Man Utd well following his world record transfer and he is forming an encouraging partnership with Victor Lindelof. Arsenal’s defence has been woeful for some time with David Luiz and Sokratis both making individual errors this season. Rob Holding is back to full fitness and could force his way into the Arsenal side but I’d still opt for Maguire and Lindelof at centre-back in this combined team.

Arsenal have sorely missed their first choice full-backs this season as Hector Bellerin and Kieran Tierney will make a huge difference now they are fit again. Aaron Wan-Bissaka has a big future ahead of him but Bellerin is more experienced and just edges him at right-back. Luke Shaw is too inconsistent at left-back so I’d go with Tierney – who I think is going to become a terrific full-back for Arsenal.

Both teams have been criticised for their ‘weak’ midfield’s this season so some may say there isn’t much to choose from in this department. Scott McTominay has become a regular under Solskjaer while Granit Xhaka has just been named Arsenal captain, however, I wouldn’t have either in my side.

Lucas Torreira is the best defensive midfielder in either squad so he should get the nod while Matteo Guendouzi is emerging as one of the most exciting young talents in Europe. The 20-year-old has shown maturity beyond his years at Arsenal and I’d pick him just ahead of Dani Ceballos.

Probably the most interesting position to pick is the advanced midfield role with the main contenders being Paul Pogba and Mesut Ozil – who are both divisive characters at their clubs and within the wider footballing community. Ozil has all the talent in the world but his attitude is questioned too often and his form has nosedived over the past 18 months. Pogba failed to force a move away from Man Utd in the summer but he’s still one of their most important players and I’d go with him in the combined eleven.

One player who picks himself is Pierre-Emerick Aubameyang as he’s undoubtedly one of the most in-form forwards in the Premier League right now and has been a superb signing for Arsenal since arriving from Borussia Dortmund.

The Gabon hitman often plays from the left side of the Gunners’ attack with Alexandre Lacazette leading the line up front and that’s how I’d deploy them in this team. Lacazette is a great team player and holds the ball up well – not to mention he’s an excellent finisher – so he’d be my pick up front.

The final place would go to either Nicolas Pepe, Marcus Rashford or Anthony Martial. Pepe joined Arsenal in a club record deal in the summer and he has obviously got bags of potential. Ask me again in a year and he might be the first name on the team sheet but for now he hasn’t proven himself enough to make the cut.

Martial is also a big talent and if he can stay fit I actually think he’ll have a great season at Man Utd but I’d go with Rashford in this team. The England international is a top player and would work well with the Arsenal duo.

So here is the completed XI: 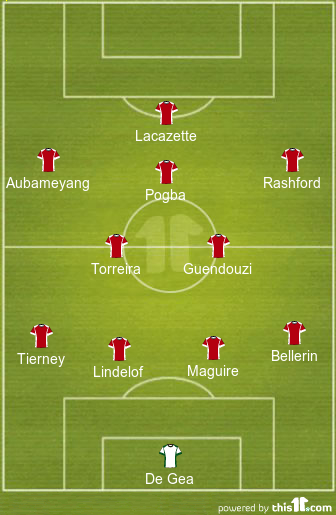