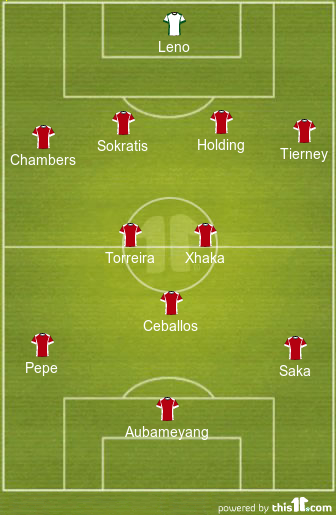 The 4-3-3 seems to give Arsenal the most balance but has been frequently overlooked by Emery this season. Bernd Leno is guaranteed his place in goal but it will be interesting to see whether Emery sticks with David Luiz and Sokratis – who have looked shaky this season – or starts with returning Rob Holding. There’s also decisions to be made at full backs. Keiren Tierney was impressive against Nottingham Forest but will Emery deem him fit enough for a Premier League start? Calum Chambers was excellent against Forest so he could keep his place at right-back.

Looking in to midfield there’s an abundance of combinations but the 4-3-3 will offer Arsenal the chance to have two players breaking up play in midfield and shielding the defence. Lucas Torreira has shown his tenacious capability and Captain Xhaka will be looking to keep the ball moving and starting attacks but we could also see Guendouzi, Ceballos or Willock could play there instead.

Up top, Aubameyang and Pepe are first names on the team sheet, and then it’s between Saka or Nelson on the left. We could even see a surprise start for Martinelli after his EFL Cup brace last week. Or, Emery could go with Ceballos on the wing and rely on his work rate to track the Untied full back. 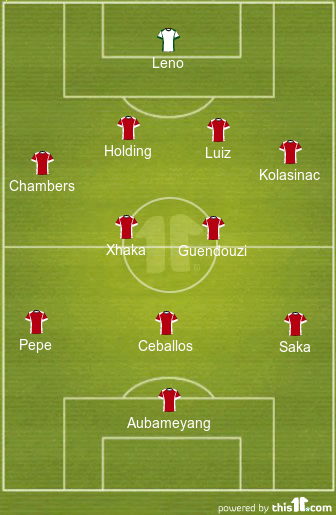 When Emery first joined Arsenal, the 4-2-3-1 seemed to be his favoured formation. However, he rarely deploys it in away games and it would be somewhat of a surprise to see it tonight.

Nonetheless, the questions over who Emery picks for his back four will most likely decide the outcome of the game. If the centre-backs can form an effective partnership and not make any blindingly awful errors, then Arsenal will be in with a real chance.

Regarding the full backs, it feels as though if Tierney plays Arsenal are better defensively and for all Chamber’s faults, he’s slotted in to right back excellently. If they can both continue in the same form, they’ll cause United problems at both ends of the pitch.

In midfield, Xhaka is sure to start and Emery usually picks Guendouzi for the big games. Just in front, Dani Ceballos will be hoping this away fixture isn’t as rapid as Anfield and he can impose himself on the game.

Up front, Bakayo Saka has done fantastically to put himself in contention for a start and it wouldn’t be a surprise to see Emery trust his youthful exuberance against Wan-Bissako, although Reiss Nelson will also be desperate for a chance to shine. 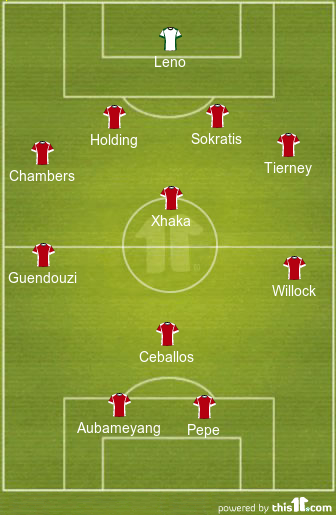 The diamond, a formation no Arsenal fan seems to see much value in, but one Unai Emery has surprisingly favoured this season. It made it’s first outing unsuccessfully against Liverpool. The idea was to fill the pitch and see Arsenal win the ball back and counter; the reality was Liverpool’s European cup winning full backs had all the space in the world to roam and Arsenal looked headless.

Emery opted for it again against Watford, where, it could be argued was working successfully as Arsenal led 2-0 at the break. However, during the second half the Gunners capitulated and were lucky to walk away with a draw.

In spite of these failures, there’s it could be chosen tonight. There’s a chance with more competent full backs this formation could be a success, however, it does feel as though the diamond offers a flatter back four and would limit Chambers or Tierney’s chances of getting forward.

The midfield will most likely see Xhaka, once again at the bottom of the diamond, exposed and over ran, with the young legs of Guendouzi and Willock either side and expected to run like horses to try and get the ball to the attacking threat of Ceballos, Aubameyang and Pepe. This formation won’t see the inclusion of Mesut Ozil as rumour has it he hasn’t travelled to Manchester.

One final tactic Arsenal will most likely employ tonight is passing from the back and all fans will hope they’ve been practising.

Overall, it’s a big game tonight, and whatever formation Emery opts for, he’ll be desperate to win.