Liverpool are in Belgium to take on Genk in the Champions League on Wednesday night. Here is the team we expect Jurgen Klopp to select for the game:

Liverpool are in Belgium to take on Genk in their Champions League group stage clash on Wednesday night. Here is the team we expect Jurgen Klopp to select for the game:

Goalkeeper: Alisson Becker made a successful return to action during the draw with Manchester United on Sunday after recovering from a calf injury so the Brazilian is expected to keep his place tomorrow with Adrian on the bench.

Defence: Liverpool have been dealt a double blow as Trent Alexander-Arnold hasn’t made the trip due to illness while Joel Matip has been ruled out of the game after aggravating a knee injury at Old Trafford.

Joe Gomez is expected to come in at right-back while Dejan Lovren should partner Virgil van Dijk in the middle of the back four. Andrew Robertson will once again line-up at left-back.

Midfield: Liverpool have plenty of options in midfield so I expect Klopp to rotate ahead of Sunday’s Premier League clash with Tottenham. Jordan Henderson is likely to be given a rest with James Milner coming in.

Naby Keita impressed off the bench against United at the weekend so I’d expect him to get a recall with Gini Wijnaldum given a breather while Fabinho should keep his place in the holding role.

Adam Lallana will be hoping to feature after coming off the bench to score against United while Alex Oxlade-Chamberlain is also pushing for a recall, however, I think they’ll both have to settle for sub roles tomorrow.

Attack: Liverpool have been handed a major boost as Mohamed Salah is back in contention after missing the Man Utd game with an ankle injury. The Egyptian international trained with the rest of the squad on Tuesday so I expect him to be given a recall in attack.

The Reds can’t afford any slip-ups here so I don’t think Klopp will take too many chances. Therefore, Sadio Mane is expected to keep his place on the wing with Roberto Firmino leading the line up front.

That means Divock Origi will have to settle for a place on the bench with the Belgian forward dropping out having started at Old Trafford but he’ll be a useful option for Klopp to have if needed. 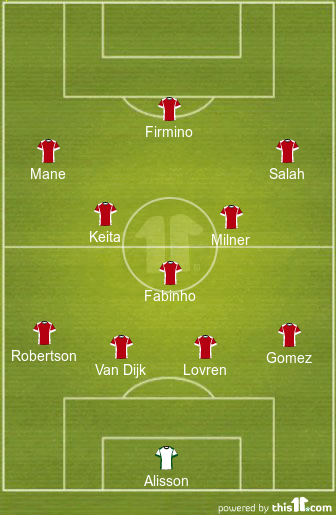