Chelsea take on Manchester City at the Etihad Stadium on Saturday evening. Here is the team we expect Frank Lampard to select for the game:

Chelsea take on defending Premier League champions Manchester City at the Etihad Stadium on Saturday evening. Here is the team we expect Frank Lampard to select for the game:

Goalkeeper: I don’t think there is any point deliberating for too long over who will start in goal as Kepa Arrizabalaga is certain to keep his place between the sticks with Willy Caballero once again on the bench.

Defence: Chelsea will continue to be without the services of Antonio Rudiger as he’s still working his way back to full fitness from a groin injury. Fikayo Tomori has cemented his place in Lampard’s back four so he should continue alongside Kurt Zouma with Andreas Christensen having to settle for a place among the substitutes.

Emerson Palmeiri appears to be ahead of Marcos Alonso in the left-back pecking order so he should keep his place against Man City but Cesar Azpilicueta is expected to be recalled at right-back with Reece James making way.

Midfield: Chelsea will receive a big boost as Jorginho is available for selection again after missing the win over Crystal Palace before the international break due to suspension. The Italian will resume his place in the holding role tomorrow evening.

N’Golo Kante is fully-fit so he should keep his place in the Chelsea starting eleven and I think we’ll see Lampard go with a three-man midfield to help cope with the threat of Man City in the middle of the park.

Therefore, Mateo Kovacic is likely to start alongside Jorginho and Kante meaning Mason Mount may have to make-do with a place on the bench this weekend.

Ross Barkley will face a late fitness test as he bids to make his return from an ankle injury but Ruben Loftus-Cheek still sidelined with an Achilles problem that’s hampered him all season.

Attack: Chelsea have confirmed a blow with the news that Callum Hudson-Odoi will miss the trip to Man City after suffering a hamstring injury while away with the England squad.

However, there is more positive news on Christian Pulisic as he’s been passed fit after recovering from a hip injury that forced him off against Palace two weeks ago so he should keep his place on the wing.

Willian is also expected to retain his place on the right side of the Chelsea attack while Tammy Abraham will lead the line up front with Michy Batshuayi and Olivier Giroud vying for places on the bench. 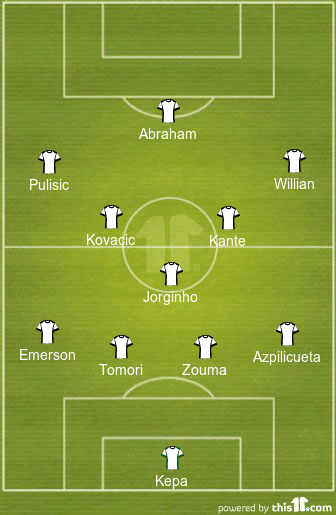