Chelsea are in Spain ahead of their crucial Champions League clash with Valencia this evening. Here is the team we expect Frank Lampard to select

Chelsea are in Spain ahead of their crucial Champions League clash with Valencia this evening. Here is the team we expect Frank Lampard to select for the game:

Goalkeeper: Kepa Arrizabalaga is almost certain to keep his place in goal tonight so Willy Caballero will once again be on the bench.

Defence: Chelsea have travelled without Antonio Rudiger as the defender is still working his way back to full fitness having recently returned to full training following a groin injury that’s hampered him for several weeks.

Andreas Christensen is pushing for a recall but I think we’ll see Lampard stick with Fikayo Tomori alongside Kurt Zouma in the middle of the back four against Valencia this evening.

Marcos Alonso hasn’t made the trip to Spain so we could see Cesar Azpilicueta moved to left-back to give Emerson Palmeiri a breather and allow youngster Reece James to be recalled at right-back.

Midfield: Chelsea have no fresh injury concerns to worry about in midfield but Ross Barkley wasn’t included in the travelling squad as Lampard says he’s still not fully recovered from his ankle injury.

I think we’ll see Chelsea go with the same midfield trio that started during the 2-1 defeat to Manchester City at the weekend with Jorginho once again in the deep lying playmaker role.

N’Golo Kante and Mateo Kovacic should also keep their places just ahead of the Italian international but Ruben Loftus-Cheek remains out with a long-term Achilles issue.

Attack: Chelsea will once again be without the services of Callum Hudson-Odoi as the winger is still recovering from a hamstring injury that he sustained while away with the England squad earlier this month.

We could see Lampard make one change to his attack with youngster Mason Mount pushing for a recall. Willian is expected to keep his place so Christian Pulisic may be the man to make way this evening.

Michy Batshuayi and Olivier Giroud are options if the Chelsea boss wants to freshen things up even further but the Blues need a result against Valencia so I expect Tammy Abraham to keep his place up front. 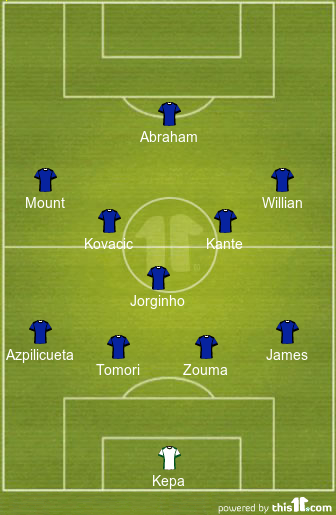