Arsenal will be looking to wrap-up top spot in Europa League Group F with a win over Eintracht Frankfurt at the Emirates on Thursday night. Here is the side Gooner Mac thinks Unai Emery will select for the game:

Goalkeeper: Emery is expected to rotate his goalkeepers once again in Europe so Emi Martinez is set for a recall with Bernd Leno dropping out.

Defence: The Arsenal boss has been deploying a back three in recent games so it will be interesting to see if he sticks with that system at home to Eintracht Frankfurt. If he does, then I expect we’ll see Calum Chambers starting alongside Shkodran Mustafi while Rob Holding is fit to return after missing the draw with Southampton due to a minor knock.

Sokratis and David Luiz are likely to be rested tomorrow night while he should see Kieran Tierney also given a breather. Hector Bellerin is carrying a tight hamstring so the Spaniard won’t be risked.

Sead Kolasinac trained today and should be passed fit after missing the Southampton game with a hamstring problem so he could start in the left wing-back position. Ainsley Maitland-Niles is expected to come in on the right.

Midfield: Arsenal will continue to be without Dani Ceballos as he’s still recovering from a hamstring injury but Emery has hinted Granit Xhaka will be recalled to make his first appearance in a month. The Swiss international hasn’t played since his bust-up with the fans so it will be interesting to see how he’s received if he does start.

Joe Willock is set for a recall to the starting eleven with Matteo Guendouzi given a breather while Lucas Torreira could also be rested ahead of Sunday’s trip to Norwich City.

Attack: I think we’ll see Pierre-Emerick Aubameyang and Alexandre Lacazette given a rest as it would be foolish to risk them in the Europa League when we desperately need to get our Premier League form back on track.

Mesut Ozil should also be given a breather after starting our last four games but Emile Smith Rowe won’t be involved after being selected for the U23s clash with Villarreal this evening.

Nicolas Pepe is expected to be recalled in the Arsenal attack while Bukayo Saka is also pushing for a recall after being named on the bench in recent weeks. Reiss Nelson is another option for Emery but I think he’ll have to settle for a place on the bench.

Gabriel Martinelli is set for another run out up front and the Brazilian youngster will be looking to continue his excellent form in the Europa League. 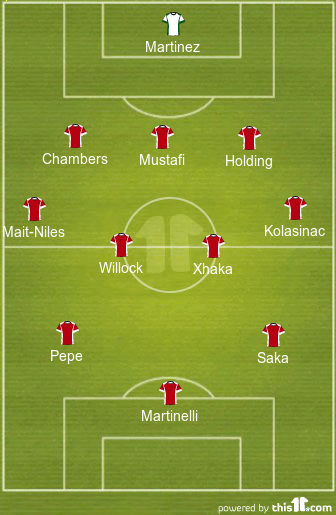