Chelsea get back to Premier League action when they take on West Ham on Saturday afternoon. Here is the team we expect Frank Lampard to select

Chelsea get back to Premier League action when they take on West Ham at Stamford Bridge on Saturday afternoon. Here is the team we expect Frank Lampard to select for the game:

Goalkeeper: Kepa Arrizabalaga is certain to keep his place between the sticks so Willy Caballero will once again have to settle for a place on the bench.

Defence: Chelsea are expected to make a couple of changes in defence as Emerson Palmeiri should return at left-back after being rested for the 2-2 draw with Valencia on Wednesday night. Reece James is likely to be the man to make way with Cesar Azpilicueta moving across to right-back following his stint on the left in the Champions League.

Fikayo Tomori is expected to be recalled after being rested last time out. Andreas Christensen is set to drop to the bench with Kurt Zouma keeping his place in the back four. Antonio Rudiger is still working on his fitness after recovering from a groin injury so this game may still come too soon for the German.

Midfield: Mateo Kovacic continued his fine recent form with a goal against Valencia. The Croatian looked a little tired towards the end of the game so Lampard may check on his fitness at training tomorrow before making a decision over whether he starts against West Ham.

Jorginho is expected to keep his place at the heart of Chelsea’s midfield while N’Golo Kante will also start yet again. Ross Barkley failed to make the trip to Spain in midweek so he’ll be a doubt for the West Ham game due to a niggling ankle injury.

Attack: Chelsea will have to assess Callum Hudson-Odoi as the winger has missed the last two games with a hamstring injury that he sustained while away with the England squad earlier this month.

Mason Mount is pushing for a recall after being named on the bench recently but Christian Pulisic continued his fine form with another goal on Wednesday night so he could keep his place in the front three. Willian has cemented himself as a regular under Lampard so Pedro will have to settle for a place on the bench once again.

Chelsea received a blow after Tammy Abraham picked up a hip injury against Valencia. It’s only believed to be a minor knock but it might be enough to keep him out of the West Ham game this weekend.

Olivier Giroud is an option for Lampard but Michy Batshuayi appears to be ahead of the Frenchman in the pecking order so he could lead the line up front for Chelsea on Saturday. 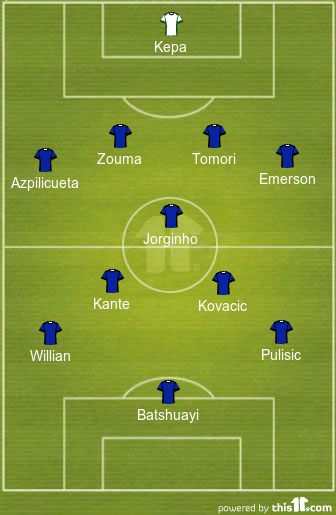